Ronny Jackson withdraws as nominee to be US veterans’ affairs secretary

In a wide ranging interview with 'Fox and Friends' US president Donald Trump distanced himself from his personal lawyer Michael Cohen. Video: FOX 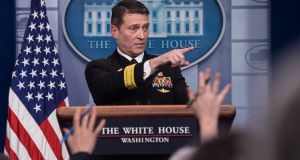 White House doctor Ronny Jackson withdrew from the race to become secretary of veterans’ affairs on Thursday amid a swirl of allegations about his professional and personal life.

Announcing his withdrawal, Mr Jackson said that the allegations against him were false, but had become a distraction for President Donald Trump.

“While I will forever be grateful for the trust and confidence President Trump has placed in me by giving me this opportunity, I am regretfully withdrawing my nomination to be secretary for the Department of Veterans Affairs,” he said.

Mr Jackson, who also served as White House doctor under Barack Obama and George W Bush, was named as the president’s pick to replace David Shulkin as the veterans’ affairs secretary, after Mr Shulkin was fired by the president last month. But his nomination had become embroiled in deepening controversy over allegations of drunken behaviour and over-prescription of drugs – allegations he has denied.

“Going into this process, I expected tough questions about how to best care for our veterans, but I did not expect to have to dignify baseless and anonymous attacks on my character and integrity,” he said in a statement.

Speaking during a live phone-in on the Fox News chat show Fox and Friends on Thursday morning, Mr Trump described Mr Jackson as “an incredible man”.

“He would have done a tremendous job ... they’re trying to destroy a man. Welcome to Washington; welcome to the swamp,” he said.

Almost immediately, questions emerged about Mr Jackson’s current position in the White House. Asked if he would remain as presidential physician, press secretary Sarah Huckabee Sanders said: “Admiral Jackson is a doctor in the United States Navy assigned to the White House and is here at work today.”

There was good news elsewhere on the personnel front for Mr Trump as CIA director Mike Pompeo was endorsed by the Senate as the new secretary of state. The Senate voted to confirm him 57 to 42, following an endorsement earlier this week by the its foreign relations committee.

Mr Pompeo takes over from Rex Tillerson, who was fired by the president last month. Mr Pompeo has already taken a leading role in several foreign policy matters, not least North Korea, travelling to Pyongyang earlier this month to meet North Korean leader Kim Jong-un ahead of a planned summit between Mr Trump and the North Korean dictator.

Asked about North Korea during his morning interview on Fox, Mr Trump replied: “We’re doing very well.” But he kept open the option of skipping the summit if necessary, “It could be that I walk out quickly, with respect... It could be that maybe the meeting doesn’t even take place. Who knows?”

He said that, while in the past, North Korea-US relations were “very, very nasty you know with little rocket man and with the buttons”, now “they want to meet”. Mr Trump once described Mr Kim as “little Rocket Man” in a tweet, and in another the US president boasted that his nuclear button was “bigger & morepowerful” than Mr Kim’s.

In his lengthy interview on Fox, Mr Trump appeared to distance himself from his personal lawyer Michael Cohen, saying that Mr Cohen had other businesses that did not involve him. He said Mr Cohen’s legal work for him represented only “a tiny, tiny, little fraction” of his legal work.

A few hours later a federal judge in Manhattan appointed a special master to review documents seized by investigators in Mr Cohen’s home and office earlier this month to assess whether federal prosecutors can have access to the information – a victory for Mr Trump’s lawyers.

Mr Trump also hit out at former FBI director James Comey during the interview, repeating his description of him as a “leaker and a liar”.

“I did a great thing for the American people by firing him,” he said, adding that “the only collusion is going on with the Democrats”.

He repeated his claim of a witch-hunt against him, arguing that “no one has been tougher on Russia than I have”.