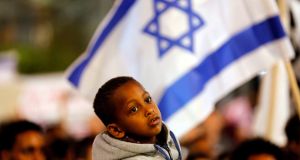 A boy takes part in a protest against the Israeli government’s plan to deport African migrants, in Tel Aviv on March 24th. Photograph: Corinna Kern/Reuters

In a dramatic turnaround, the Israeli government has scrapped its controversial plan to deport tens of thousands of African asylum seekers, after no African country was willing to accept them.

“At this stage there is no possibility of implementing involuntary deportations to a third country. Therefore, the state has ceased to hold hearings as part of the deportation policy, and no more deportation decisions will be made at this time,” a government representative told Israel’s high court.

The Africans are seeking asylum, claiming to be fleeing war and persecution. The government says they are economic migrants and that it has every right to protect its borders.

The cancellation of the deportations drew cries of dismay from right-wing politicians and activists, and renewed calls to pass legislation that would allow the government to override high court rulings, after the judiciary blocked earlier government plans to deport the 38,000 migrants, most of whom are from Eritrea and Sudan.

Prime minister Binyamin Netanyahu announced that following Uganda’s and Rwanda’s refusal to take in the asylum seekers under the terms Israel demanded, immediate preparations were being made to reopen detention facilities for the Africans.

Mr Netanyahu is also pushing for legislation to allow the Knesset parliament to override high court rulings against deportation. The far-right Jewish Home has threatened to vote against the coalition if legislation is not advanced within 10 days.

Earlier this month, following a right-wing backlash, Mr Netanyahu cancelled a deal under which the UN refugee agency would take responsibility for resettling 16,250 asylum seekers in western countries, allowing the rest to stay and work in Israel.

The cancellation of the deportations was welcomed by those facing expulsion.

“I’m thrilled. I’m speechless. I was so scared every day. If I can stay here it will be good, I’ve lived here so long. I have a job and have Israeli friends. I am used to the place,” said Ristom Haliesilase, a 34-year-old Eritrean who lives in Tel Aviv and works as a care giver for the elderly.

The headquarters of a pro-deportation group based in south Tel Aviv – home to the highest concentration of asylum seekers – criticised the government.

“The state has long since lost its credibility and ability to govern. South Tel Aviv residents are stuck in the terrible reality the migrants have created,” the group said in a statement.