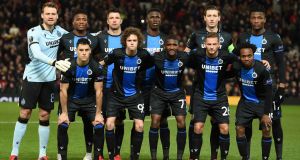 Club Brugge have been crowned champions of Belgium after the Jupiler League was cancelled. Photograph: Oli Scarff/Getty/AFP

Uefa, Europe’s football leagues and top clubs have emphasised their determination to complete the 2019-20 season despite the coronavirus shutdown, with Uefa saying it may not accept clubs into next season’s Champions League if they have not qualified in the normal way.

In a joint letter sent on Thursday night to Europe’s national FAs, leagues and top-division clubs, the Uefa president, Aleksander Ceferin, the chairman of the European Club Association, Andrea Agnelli, and Lars-Christer Olsson, the president of European Leagues, maintained that remaining club matches in national leagues and the Champions and Europa Leagues could be completed by playing into July and August. However they acknowledged the scale of the crisis means they do not expect to have a clear idea of how that may be done until mid-May at the earliest.

As reported by the Guardian before Uefa’s video conference with national FAs on Wednesday, the football authorities in England and across Europe are increasingly accepting that starting to play again by June is optimistic, a revision of their initial hope the season could be finished by June 30th.

In the letter, Ceferin, Agnelli and Olsson wrote: “We are confident that football can restart in the months to come – with conditions that will be dictated by public authorities – and believe that any decision of abandoning domestic competitions is, at this stage, premature and not justified.

“Since participation in Uefa club competitions is determined by the sporting result achieved at the end of a full domestic competition, a premature termination would cast doubts about the fulfilment of such condition. Uefa reserves the right to assess the entitlement of clubs to be admitted to the 2020-21 Uefa club competitions, in accordance with the relevant applicable competition regulations.”

The joint letter was sent after the Belgian league management board on Thursday became the first in major European football competition to recommend scrapping efforts to finish the season, saying it will award its championship to Club Brugge who are 15 points ahead of second-placed Gent. The league’s clubs will now have to seriously think about whether to accept that recommendation given the collective statement of intent by Uefa, the ECA and EL.

The letter acknowledged the “health crisis caused by the spread of Covid-19 has no precedents in our society” but, referring to the decision to allow more time for club competitions to run into the summer by postponing the summer’s European Championship, said: “European football has nonetheless been capable of reacting as one united family. The common standpoint struck on March 17th by Uefa, the ECA and EL was that every effort had to be made in order to allow all domestic and European competitions to be concluded in compliance with their formats.”

Referring to the working group set up by Uefa to consider how matches could be completed, the letter noted the idea of trying to finish national leagues first, then play the remaining Champions League and Europa League ties after that. The work is “now focusing on scenarios encompassing the months of July and August”, the letter said.

“Closely following the development of the current situation, the calendar working group will indicate as soon as possible, and ideally by mid-May, which of the plans can be enacted for the completion of the season without leaving anyone behind. Stopping competitions should really be the last resort after acknowledging that no calendar alternative would allow to conclude the season.” - Guardian

Christ Martin steals a point for resurgent Derby against Forest 15:23
Brighton see off doomed Norwich to edge closer to survival 15:09
Eamon O’Shea: ‘We spent quite a bit of time talking about older people rather than to older people’ 08:00
The Best of Times: Ireland women’s hockey team’s World Cup fairytale 07:00
Michael Walker: Ian Baraclough staying on trend, from Sligo to Windsor Park 06:00

1 Eamon O’Shea: ‘We spent quite a bit of time talking about older people rather than to older people’
2 Matt Williams: Six Nations must recognise the desire for revolution outside Europe
3 Monica Seles: The warrior queen who could have been the best ever
4 Michael Walker: Ian Baraclough staying on trend, from Sligo to Windsor Park
5 Aidan O’Brien targets historic eighth Epsom Derby win with strong hand
Real news has value SUBSCRIBE
Crossword Get access to over 6,000 interactive crosswords