Tickets may be valid for rescheduled events; refunds are available for cancellations 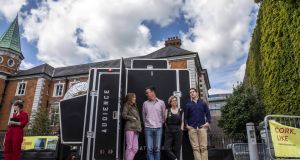 Much of Ireland’s cultural life was put on hold when the coronavirus outbreak turned into a pandemic. Theatres, cinemas, libraries, museums, galleries and music venues, from small clubs to huge auditoriums, had to cancel or postpone countless events; preparations and rehearsals stopped. Festivals that were months, often years in the planning were put on hold or scrapped.

What follows is a round-up of some of the affected events; we will update it as we receive more information.

Your tickets will be valid for rescheduled events; and although refunds are available for cancellations, many purchasers have chosen not to ask for their money back – or are buying vouchers for future performances – in order to support artists and production companies that have seen so much of their work vanish, and so help lessen the destructive effect of the virus and its accompanying lockdown.

Galway 2020
The European Capital of Culture had just got going on February 1st. Galway 2020 is assessing what can be rescheduled; it will announce its decisions “in the very near future”; galway2020.ie.

Cellisimo cello festival
This nine-day international cello festival (April 25th-May 3rd), which Music for Galway planned to run every three years as a legacy of Galway 2020 European Capital of Culture, has been rescheduled for 2021. (Precise dates to be confirmed.) The programme included orchestral concerts, world premieres, chamber recitals and solo performances. You can get a refund, keep your tickets for the rescheduled festival, or donate your tickets’ value to Music for Galway; musicforgalway.ie

Cork Midsummer Festival
This year’s festival, which had been due to run from June 12th to 21st, was cancelled on March 31st. Its director, Lorraine Maye, said. “We will be working with our artists over the coming weeks and months to try to bring some of their brilliant work to you in other ways”; corkmidsummer.com.

DublinDanceFestival
The festival in venues across Dublin, May 19th-31st, is cancelled in light of Covid-19. dublindancefestival.ie

Great Music in Irish Houses
Ireland’s longest-running chamber music festival (June 7th-14th), announced on April 22nd that this year’s festival is cancelled because of Covid-19. The board, staff and director Ciara Higgins hope much of this year’s programme can take place in 2021, and still hope to mark the festival’s “significant milestone”, 50th anniversary, with a musical celebration later this year. greatmusicinirishhouses.com

Cúirt International Festival of Literature
The literary festival in Galway is going online for this year’s event, from Thursday April 23rd to 25th, presenting 11 events in a virtual version of the 35-year-old festival. The festival will be streamed free on the Cúirt YouTube channel. Digital events include Jan Carson and Kevin Barry in conversation with Peggy Hughes; Eimear McBride with Edel Coffey; Sara Baume in conversation with Sinéad Gleeson; Elaine Feeney in conversation with Lisa McInerney; Roisín Kelly and Michael Gorman, Mary Costello and Alan McMonagle. Other events include the authors Anne Enright, Owudinni Mustapha and Carolyn Forché. Some other headline events will be rescheduled for later in the year. Cuirt.ie

Carlow Arts Festival
The multidisciplinary festival due to run June 3rd-7th, cancelled the 2020 festival. Director Jo Mangan and the team said “on government advice it would be unwise for us to go ahead with an event of this scale... we already working towards bringing Carlow alive with festival fun again in 2021.” It is however still planning to present Artworks 2020 exhibition later in the year, the submission deadline is extended to April 10th. carlowartsfestival.com

Galway International Arts Festival
On April 21st, the festival (July 13th-26th) said “while today’s government statement regarding licensed events of mass gatherings in excess of 5,000 people does impact the festival, we await further guidance on restrictions on mass gatherings from NPHET”. Noting the government plans further updates before May 5th, the festival is awaiting further clarification on crowd restrictions “before we make a decision on whether this year’s Galway International Arts Festival goes ahead as planned”. giaf.ie

Commercial gigs and festivals are often tied into international touring dates. Glastonbury in the UK was cancelled, and some artists have cancelled or rescheduled tours, which will affect planned lineups; for example, Nick Cave & the Bad Seeds cancelled their European and UK tour, including 3Arena in Dublin on May 8th and 9th. Many other 3Arena gigs rescheduled.

MCD
Ireland’s largest concert promoter said on April 22nd, after the ban on events over 5,000 capacity until August 31st, that it is rescheduling all shows affected
– original tickets valid for new dates, patrons will be notified when confirmed. “Regrettably, it will not be possible to reschedule all of the affected events and a small number will be cancelled with full refunds available.” MCD expects to finalise a full schedule by Tuesday, April 28th. For other events the current government directive on mass gathering remains in place until May 5th. Some rscheduled gigs are on MCD’s site. Longitude festival in Marlay Park, Dublin (July 3rd-5th) has been cancelled. Ticket refunds will be available from original point of purchase, its organisers have said. mcd.ie

Aiken Promotions said it is postponing concerts that were due to take place up to and including April 19th, including at Vicar St, and Live at the Marquee in Cork. It is currently working to reschedule dates and will provide an update for each event. aikenpromotions.com

The National Concert Hall will be closed to the public until April 19th, and events scheduled to take place before then have been cancelled; customers will be refunded in due course. nch.ie

Forbidden Fruit (May 30th-31st): The 10th anniversary of the festival is over the June bank holiday – information to be confirmed. As of April 1st promoter POD said: “We are still working with Dublin City Council and local authorities on an hourly basis. At this time we have no guidance on outdoor event restrictions during the May-June period. Once we receive clarity on the situation from the relevant agencies, we will pass on to our customers immediately.’’ pod.ie forbiddenfruit.ie/

All Together Now
Promoters POD on April 21st announced “with great sadness” that this year’s festival (Co Waterford, July 31st-Aug 2nd) is cancelled. A statement on its site said festival tickets for 2020 will be valid for 2021’s festival, and “we would ask you to stand with us through this time and hold your tickets, as an independent Irish festival, doing so will go a long way to our survival through these challenging times”. Ticketmaster will be in contact with ticket holders within a week.

Life festival
Festival organisers will have “further information” in the coming days about the festival (May 22nd-24th, Belvedere House. Mullingar) and ticket holders will be contacted directly by ticket providers.

Body & Soul (June 19th-21st): The 11th weekend outdoor midsummer festival in Co Westmeath has been cancelled. Avril Stanley, director of the independent festival, issued a “heartbroken” statement on April 21st, after large-scale gatherings up to the end of August were ruled out. “While the impact of this decision creates ripples throughout our creative community spread across the globe, Body&Soul’s top priority lies in keeping its artists, attendees, staff and extended community healthy and safe, and we absolutely respect the government’s decision and the steps it must take to protect everyone”.  The ticketing company will contact ticketholders about refunds, and “we appreciate your patience on this matter and they will get to you as soon as possible". bodyandsoul.ie

Abbey Theatre
The national theatre closed its doors on March 12th, and has pledged to “do our best to support the artists and companies”. Some shows (The Fall of the Second Republic and Opera Briefs ) were cancelled. Other shows scheduled for March-May are postponed with a view to rearranging for later, including productions of Faith Healer, Ireland’s Call, Joe Dowling: One Night Only, The Patient Gloria at the Brighton Festival, Dublin Dance Festival, RTÉ All Ireland Drama Festival, This Beautiful Village, Me, Mollser, A Taste of Honey. Later productions including Into the Dark Woods, Everything Not Saved, and Purple Snowflakes and Tittywanks were due to go ahead as planned.

As part of a move online, the Abbey has initiated Dear Ireland, inviting 50 Irish writers – including Blindboy, Deirdre Kinahan, Rosaleen McDonagh, Frank McGuinness, Enda Walsh and Carmel Winters - to write a monologue, to be performed by 50 actors, to be presented on the Abbey’s digital channels during April.

Gate Theatre
Temporary closure since March 12th ended the Gate’s performances of Our New Girl by Nancy Harris 10 days early. The theatre also postponed The Little Foxes by Lillian Hellman, which was to run March 26th- May 9th. It later postponed The Shadow of a Gunman by Sean O’Casey (May 14th-July 11th).

Director and CEO Selina Cartmell said the programme for the rest of 2020 is “under constant review”.

Cartmell said: “The Gate stands in solidarity with our theatre friends and colleagues as we try to contend with this new reality.” Box office will contact ticket holders about postponed performances, and the theatre said it would be grateful if patrons are in a position to donate pre-paid tickets back to the Gate Theatre, or buy a Gate voucher, as a gesture of financial support. gatetheatre.ie

Bord Gais Energy Theatre
The 2,000-seater theatre and box office at Grand Canal Squre in Dublin will remain closed to the public until April 19th. Some performances have been cancelled or rescheduled and original tickets are valid for rescheduled dates (cancelled shows bought by phone or online will be refunded automatically by Ticketmaster).

Offset, the conferences for the design and creative industries due to take place April 3rd-5th 2020, has been rescheduled for next year, April 23rd-25th 2021.

On Your Feet, the touring musical, has been cancelled (April 21st-25th)

Druid Theatre’s production of Tom Murphy’s version of The Cherry Orchard was due to be staged at the BGET April 8th-11th. It has been postponed. bordgaisenergytheatre.ie

Irish National Opera
Following cancellation of all performances of INO’s Carmen (March 22nd-28th), it said: “We will endeavour to perform it for the public at the first possible opportunity”. INO later also had to cancel all performances of its The Abduction from the Seraglio in both the National Opera House Wexford (May 15th), and Gaiety Theatre Dublin (May 19th-23rd). irishnationalopera.ie

Project Arts Centre
Project is closed to the public until April 19th and is working on ways to activate Project online. It will be in touch with customers and will post any updates. Following cancellation of the entire Where We Live festival, a dance theatre piece To Be Frank, (scheduled April 24th-May 2nd), has also been postponed. projectartscentre.ie

Cinemas are closed, and film releases are postponed.
Libraries, museums and galleries are also closed temporarily.

If you have had to postpone or cancel a cultural event, you can email details to dfalvey@irishtimes.com