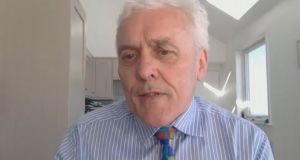 Britain’s National Health Service (NHS)) has told doctors and nurses they can treat coronavirus patients without wearing full-length surgical gowns, suggesting plastic aprons as an alternative if supplies run out.

Public Health England issued the new guidance on Friday evening after health secretary Matt Hancock admitted that there was a shortage of surgical gowns and other personal protective equipment (PPE).

Mr Hancock told the House of Commons health committee on Friday that surgical gowns were the “pressure point” in Britain’s shortage of PPE. “We have another 55,000 gowns arriving today, and we’re working on the acquisition internationally of more gowns, but it is a challenge.”

Britain’s death toll from the coronavirus has risen to 14,576, an increase of 847 since Thursday. Chief scientific adviser Patrick Vallance said deaths from the virus appeared to be reaching a plateau but would remain high for some time.

“I expect, unfortunately, this number to continue at the plateau for a while, and then begin to come down slowly after that. We are not through this yet,” he said.

Prof Anthony Costello, professor of public health at University College London and a former World Health Organisation director, told the Commons health committee that the government had acted too slowly in response to the virus. He said Britain’s death toll could reach 40,000, but only a small fraction of the population would be infected in the first wave of the epidemic.

“The recent estimates, even from the chief scientific officer, is after this wave we could have only maybe 10-15 per cent of the population infected. So the idea of herd immunity would mean another five, six waves, maybe, in order to get to 60 per cent.”

Mr Hancock said Britain would rebuild teams for contact tracing, which the government abandoned in the early weeks of the epidemic. He said the teams would be part of a strategy that includes an app to identify contacts and warn them if someone they have met has become infected with the coronavirus.

“The app is itself a contact tracing app, that is the point of it, to be able to assist individuals to do contact tracing themselves by notifying people who they have been in close contact with when they have downloaded the app. And then of course link that to testing, so people can get the tests.”

The British government has also set up a taskforce to help to find a vaccine against the coronavirus, including scientific advisers, government representatives and the pharmaceutical industry. Sir Patrick played down the likelihood of success, however, stressing the importance of safety, and the need to pursue many different vaccine options.

“Just to put some realism on vaccine development, each single project does not have a high probability of success. So although everyone goes out with great enthusiasm and we hope they work, it’s never the case that you know you’ve got a vaccine that’s going to work,” he said.