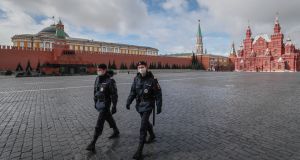 Police officers wearing protective masks walk on the Red Square in front of the Kremlin in Moscow on Friday. Photograph: Yuri Kochetkov/EPA

Russia’s government has given urgent clearance for an anti-malaria drug donated by China to be given to coronavirus patients, as it tries to halt a rapidly growing Covid-19 outbreak.

Prime minister Mikhail Mishustin authorised the distribution of 68,000 packs of hydroxychloroquine that Shanghai sent to Russia, despite questions surrounding the efficacy and safety of the drug in treating Covid-19 sufferers.

Dozens of clinical studies into the drug are taking place around the world but results published so far have been inconclusive. Nevertheless, doctors in several countries including the United States say they are prescribing it to coronavirus sufferers, even though the benefits of the treatment remain unclear.

International sales of hydroxychloroquine have rocketed with the spread of the pandemic, boosted by US president Donald Trump’s claim that the drug could be a “game changer” in the fight against coronavirus.

Russia’s government newspaper, Rossiiskaya Gazeta, said other medicines containing hydroxychloroquine were already registered in the country for treating malaria and types of asthma, lupus and arthritis.

“To date, there is insufficient clinical evidence to draw conclusions about the efficacy and safety of the drug in treating Covid-19,” said Yuri Mochalin, head of external relations in Eurasia for French pharmaceutical giant Sanofi, which sells hydroxychloroquine in Russia.

Moscow’s rush to introduce the Chinese drug gives a sense of its growing alarm over the swift spread of coronavirus across the country of 140 million people.

Russia announced a record one-day rise in cases of 4,069 on Friday, bringing its total number of people infected to 32,007, of whom 273 have died.

President Vladimir Putin has warned officials to prepare for even “the most difficult and extraordinary” developments in the weeks ahead, and on Friday he said Russia’s hospitals had only 72 per cent of the 95,000 coronavirus beds he wants to see in place by April 28th.

“Risks linked to the spread of the epidemic remain very high, the peak has not passed, the number of cases is increasing, and not only in Moscow but in many other regions,” Mr Putin said during a video call with provincial leaders.

“Regardless of any difficulties . . . every regional leader should understand: within the designated period, the required amount and quality of work must be done. I hope you’ve all heard that.”

The Kremlin has reluctantly postponed a huge military parade planned for May 9th, Russia’s Victory Day national holiday, to mark 75 years since the end of the second World War.

“The risks associated with an epidemic that has not passed its peak are extremely high,” Mr Putin said on Thursday. “And this does not give me the right to start preparations for the parade and other public events.”