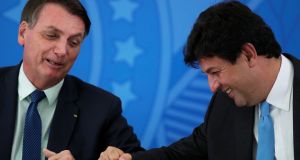 The political crisis caused by Brazilian president Jair Bolsonaro’s controversial response to the coronavirus pandemic has intensified after he dismissed his health minister.

In a television interview following Thursday night’s sacking, the increasingly isolated far-right leader accused congress of plotting “to remove me from government” as relations between Brazil’s various branches of government become increasingly strained.

Much of Brazil’s political establishment is increasingly alarmed at the president’s demand to relax measures put in place to impede the spread of coronavirus, despite limited testing capabilities meaning the extent of its spread across the world’s sixth most populous nation is unknown.

Mr Bolsonaro accused Rodrigo Maia of “twisting the knife” after the head of the lower house of congress oversaw passage of an aid package for state and city governments whose finances have been devastated by the economic fallout from the pandemic. The president’s economics team had opposed the version of the bill passed.

Mr Bolsonaro also reportedly told several legislators that he had intelligence showing Mr Maia was working with the governor of São Paulo state and elements of the supreme court to topple him.

Thursday’s sacking of Luiz Henrique Mandetta, the most popular member of cabinet due to his handling of the crisis, removes the administration’s most vocal advocate of quarantine measures to combat the spread of the virus. This had placed him in direct conflict with the president who has consistently sought to downplay the pandemic and attacked quarantine measures as devastating to the economy.

Following weeks of increasing tensions the relationship between the two men definitively broke down after Mr Bolsonaro once again defied his own administration’s advice to the public when visiting Dr Mandetta’s local bakery, where he was filmed embracing people and eating food at a counter. In a television interview on Sunday a resigned sounding Dr Mandetta said Brazilians did not know whether to listen to the minister of health or their president.

In unveiling Nelson Teich as Dr Mandetta’s successor the president once again attacked quarantine measures and said a “transition” was now under way “to redirect” his government’s position. While the new minister, a doctor like his predecessor, said there would be no “abrupt or radical” change in government policy he said he was in “complete alignment” with the president.

Meanwhile São Paulo, Brazil’s most populous state and centre of the pandemic in the country, extended quarantine measures for a second time to May 10th. The decision comes as the state’s public health system comes under increasing pressure as demand for beds in intensive care units soars. The efforts made by state governor João Doria to suppress the virus in Brazil’s economic powerhouse have seen him singled out for attacks by Mr Bolsonaro.