Association wants a clear explanation of the rationale behind the decision 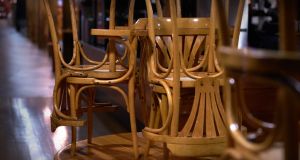 The Restaurants Association of Ireland, described the curfew decision as bizarre and out of the blue. Photograph: iStock

The new 11pm closing time imposed on restaurants will make thousands of businesses unviable and place tens of thousands of jobs at risk, the Restaurants Association of Ireland has warned.

Under new Covid-19 regulations to come into effect on Monday restaurants and pubs which serve food will have to close at 11pm, the Taoiseach Micheál Martin and Tánaiste Leo Varadkar confirmed on Tuesday.

The Tánaiste clarified that “customers should be off the premises by 11pm” a deadline which effectively means last orders for food in restaurants and bars will be by 9.30pm at the latest, with no lingering over a bottle of wine, given the current time restriction of 90 minutes for customers.

Following Tuesday night’s announcements by the Government, the Restaurants Association of Ireland has said it is seeking “ an immediate and urgent” meeting with Mr Martin.

The association said the decision to close restaurants and pubs by 11pm will make the current difficult situation impossible for many restaurants and gastro pubs, placing tens of thousands of jobs at risk.

It wanted a clear explanation of the rationale behind the decision, for which it said its members had no prior consultation or warning.

With the new curfew, the Government has cut 90minutes - 150minutes of trading time for restaurants who normally close at between midnight and 1am, the association said,

Adrian Cummins, chief executive of the Restaurants Association of Ireland, described the decision as bizarre and out of the blue.

He said “this new 11pm curfew is a body blow to the restaurant sector. Restaurants are now one of the safest social outlets in the country and by closing restaurants at 11pm, it will drive people to impromptu house parties. The loss of an hour will be the difference to people making wrong decisions and will affect the economics of viable businesses. This announcement will have a serious impact for staycation businesses in Ireland.”

In its recommendations to the Government, NPHET said that while the vast majority of restaurants and gastropubs had adhered to guidelines, there should be “continued robust inspection and enforcement arrangements and the enhancement of these arrangements where necessary.”

The team said pubs and bars “pose a particular risk to the spread of Covid 19 as alcohol can make people less aware of social distancing and hygiene and respiratory behaviours, loud atmospheres can increase particles emitted and many pubs and bars can be small spaces with poor ventilation.”

Meanwhile the Vintners Federation of Ireland (VFI) which generally represents pubs outside Dublin acknowledged that in rural areas there was some disappointment that the Government’s new plan did not differentiate pubs in areas where the Covid risk was very low.

But a spokesman for the VFI said it would be difficult to see how a two tier system would work, without bus loads of people moving throughout the country to source pubs that were allowed open. He said many publicans were preparing to return stock to suppliers for the third time. Publicans he said had returned stock in March, and again in late July and now would do so again.