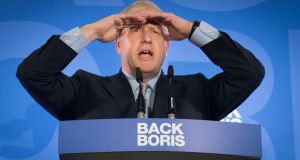 Boris Johnson during the launch at Westminster of his campaign to become leader of the Conservatives and prime minister. Photograph: Stefan Rousseau/PA Wire

MPs have rejected a Labour motion aimed at preventing the next prime minister from taking Britain out of the EU without a deal against the will of parliament.

Ten Conservatives supported the motion, which would have given MPs control of the parliamentary agenda for a day so that they could initiate legislation blocking a no-deal Brexit.

However, eight Labour MPs defied their party whip to vote against it, and the motion was defeated by 309 to 298, a majority of 11 votes.

The DUP’s 10 MPs voted with the government against the motion, but Independent unionist Sylvia Hermon voted in favour of it.

Shadow Brexit secretary Keir Starmer said MPs had to create a safety valve to stop the next Conservative leader from taking “disturbing, ludicrous and reckless” actions in pursuit of a no-deal Brexit.

“We have witnessed candidates openly advocating a damaging no-deal Brexit, and even proposing dragging the queen into politics by asking her to shut down parliament to achieve this,” he said.

Launching his leadership campaign on Wednesday, frontrunner Boris Johnson said that Britain must leave the EU on October 31st. He said a further delay to Brexit would lead to a Conservative defeat at the next general election, and put Labour leader Jeremy Corbyn into Downing Street.

He promised to negotiate in a friendly spirit with the EU to secure an improvement on the withdrawal agreement MPs have rejected three times.

“I am not aiming for a no-deal outcome, I don’t think we can end up with any such thing. But it is only responsible to prepare vigorously and seriously.

“It’s only if we have the guts and the courage to get ready for it that we will carry any conviction in Brussels and get the deal we need. Delay means defeat, delay means Corbyn. Kick the can again and we kick the bucket.”

Chancellor of the exchequer Philip Hammond said it would be impossible to secure a new deal by the end of October, and warned leadership candidates against committing to a rigid timetable.

“I think it’s not sensible for candidates to box themselves into a corner on this. Parliament will not allow a no-deal exit from the EU, and our experience to date has suggested that it may not be that easy to agree a deal in parliament.

“Boris and any other candidate is perfectly entitled to say that they need to go and test this for themselves. But I can advise them that the EU is not likely to be prepared to reopen the withdrawal agreement we have already opened with them.”

He said the Conservatives needed a new kind of leader to take Britain beyond Brexit, contrasting his background as the son of struggling Pakistani immigrants with the privileged upbringing of other candidates.

“I would say I’m a change candidate – Boris Johnson is yesterday’s news. He’s been around in politics for a while, he’s achieved a lot, he’s still got a big role to play. But I think if we’re trying to connect with the next generation and move forward as a country then I think it’s time for the next generation with a bold new agenda.”