Russian police crack down on supporters of detained journalist

Hundreds arrested during protests against handling of Ivan Golunov’s case 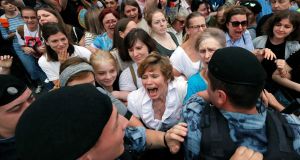 More than 1,200 marched through central Moscow on Wednesday to protest against the handling of Ivan Golunov’s case. Photograph: EPA/Yuri Kochetkov

Police in Moscow cracked down on a demonstration against the framing of Russian investigative journalist Ivan Golunov on Wednesday, arresting hundreds of people.

Alexei Navalny, Russia’s most prominent opposition leader, was among the first to be detained. He faces charges of organising an illegal public meeting that could land him a 30-day prison sentence.

Mr Golunov, a special correspondent for the Meduza online newspaper, was arrested late last week on fabricated drug charges, but was released on Tuesday after a massive public outcry. Russia’s interior ministry has since dropped the charges and suspended several senior police officers.

The rare official backdown took many Russians by surprise and was greeted as a victory over police corruption and the country’s repressive anti-narcotics laws.

More than 1,200 marched through central Moscow on Wednesday to protest against the handling of Mr Golunov’s case and call for the reform of Russia’s repressive anti-drug legislation. “I’ve only been to anti-war protests before, but this time the authorities have crossed a red line,” said Irina, an elderly computer programmer. “If it’s Golunov today it could be me tomorrow.”

Moscow police warned citizens to stay away from the march early in the day, saying it was unlawful and would interfere with other events being held in the city to celebrate the annual Independence Day holiday. In a bid to avoid reprisals, demonstrators carried no banners and refrained from chanting anti-government slogans.

The arrests began almost as soon as the march got moving with police targeting people wearing “We are Ivan Golunov” solidarity badges.

Several journalists were detained including reporters for Reuters and Meduza as well as Russia’s top business dailies Vedomisti and Kommersant.

Protesters had planned to end the march outside the interior ministry headquarters, but helmeted riot police blocked off the approach road leaving demonstrators to assemble in a garden. Scuffles broke out as law enforcers wielding batons moved in dragging people away at random to cries of “shame” and “freedom”.

Mr Navalny was arrested as he arrived at the march and bundled roughly into a police van. Police accused him of organising the protest, a charge he denies. The interior ministry said at least 200 people were detained at the protest. OVD-info, a rights group that monitors police arrests, put the toll at 420 detentions.

Opposition leaders said the police crackdown signalled concern in the Kremlin that the surge of public anger over the Golunov affair could evolve into a broader politicised protest. “The authorities were terribly scared by the fantastic and unified display of solidarity” [with Mr Golunov] Mr Navalny tweeted from a detention cell on Thursday afternoon.

The mass arrests proved that – even though they had retreated from the Golunov affair – the security forces were not prepared to back down in the face of protests, said Russian opposition politician Dmitry Gudkov. “I saw how they detained people... There was no need to shout, carry emblems or even look daring. Police had one task: to show that they are the authorities here,” he wrote on the Echo Moskvy radio website. “In a police state a prison camp logic reigns.”

1 More than 30 people queue overnight to secure property in Carlow
2 Covid-19: Possible extra restrictions for four counties to be decided by weekend
3 Large sections of Garda to be disarmed following review
4 Hello Eir, is anybody there? Four unhappy customers complain
5 Coronavirus: Further 430 cases reported in State is most in a day since April
Real news has value SUBSCRIBE