Members of Manchester bombing network ‘may still be at large’ 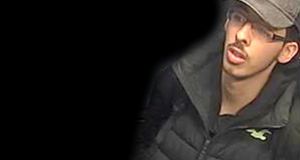 Greater Manchester Police have released a picture of Salman Abedi on the night he carried out the Manchester Arena terror attack. Photograph: PA 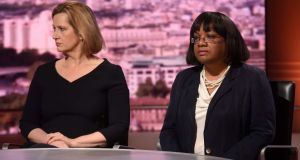 Britain’s home secretary Amber Rudd and Labour’s shadow home secretary Diane Abbott on the BBC’s Andrew Marr show, where Ms Abbott was questioned about her past support for the IRA. Photograph: Jeff Overs/Reuters

Some members of the network behind the Manchester Arena suicide bombing last week could still be at large, Britain’s home secretary Amber Rudd has warned. Ms Rudd was speaking after Britain lowered its security threat level from critical to severe, which means a terrorist attack is highly likely, but not necessarily imminent.

She told the BBC’s Andrew Marr that intelligence services were tracking 500 major plots, and had 3,000 people in their sights and a further 20,000 on their radar. The Manchester suicide bomber Salman Abedi had been known to MI5 for five years but Ms Rudd rejected the suggestion that it may have missed an opportunity to apprehend him.

“The intelligence services are still collecting information about him and about the people around him. But I would not rush to conclusions, as you seem to be, that they have somehow missed something. What this reminds us is the scale of the problem that we have, the enemy that we have, Daesh, that is trying to weaponise the young people in our society,” she said.

The Conservatives sought to bring the issue of terrorism into the centre of the general election campaign on Sunday, claiming that Jeremy Corbyn would make the country less safe. Defence secretary Michael Fallon said Mr Corbyn was blaming Britain for the Manchester attack when the Labour leader said last Friday that there was a link between Britain’s foreign policy and terrorism.

“This is a man who has opposed . . . every piece of anti-terrorist legislation, who . . . does not support our military action in Iraq and Syria where the RAF are trying to keep us safe, dealing with terrorists who are planning attacks against western Europe and indeed against this country, and has always questioned the nuclear deterrent and indeed our Nato deployments. We would certainly be less safe if Jeremy Corbyn was prime minister,” Mr Fallon said.

Mr Corbyn and his shadow home secretary, Diane Abbott, also came under pressure over their past statements about the IRA and associations with republicans. Mr Corbyn, who said last week that he had never met the IRA, said on Sunday that he had not met anyone he had known to be in the IRA.

Questioned by Andrew Marr over a statement during the 1980s expressing support for the IRA because it would mean a defeat for the British state, Ms Abbott compared her views to a hairstyle.

Conservative support has fallen since Theresa May’s U-turn over a manifesto commitment to reform the way older people pay for social care. Labour’s support has risen, as has Mr Corbyn’s approval rating, particularly among women voters. One poll shows the Conservatives just one point ahead of Labour among women.

As the campaign enters its final 10 days, the Conservatives will seek to keep the focus on terrorism, Brexit and the choice between May and Corbyn for prime minister. Labour hope to shift attention towards public services, healthcare and the welfare of pensioners, policy areas where the party is strongest in the polls.