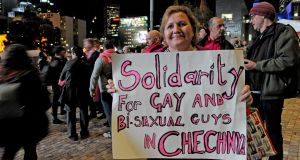 The Pink Wolves candlelight vigil in Melbourne, Australia, in solidarity with gay and bisexual men being abducted and tortured in Chechnya. Photograph: EPA/Joe Castro

The powerful speaker of the Chechen parliament personally oversaw the torture of gay men during a violent anti-gay purge in the Russian republic early this year, according to evidence presented in a new report by Human Rights Watch (HRW).

News that Chechen law enforcers had rounded up dozens of men suspected of being gay and submitted them to brutal beatings in secret jails, was first reported in April by Novaya Gazeta, an independent Russian newspaper known for investigations. At least three people are believed to have died as a result of the violence.

Homophobia is rife in Chechnya’s highly traditional mainly Muslim society. Chechen officials have denied the allegations claiming that there are no gays in the republic. Ramzan Kadyrov, the autocratic president of Chechnya, dismissed the Novaya Gazeta reports as a “provocation” aimed at staining the honour of his people. However, evidence presented in They Have Long Arms and They Can Find Me, a 40-page report released by HRW last week, suggests that the anti-gay purge was carried out with the full knowledge and blessing of the Chechen leadership.

Most of the detainees interviewed by HRW after their release said they had overheard their jailers referring to Magomed Daudov, the speaker of the Chechen parliament, and to orders he allegedly issued about violence against gay men.

Second only to Kadyrov among powerful Chechen officials, Daudov goes by the name of “Lord” and is an easily recognisable figure. Three former detainees told HRW they had seen him at the prisons where they were being held and tortured.

All of the victims said they had suffered repeated beatings with security officials kicking them with booted feet, hitting them with polypropylene pipes and sticks and forcing other inmates to participate in the violence.

Torturers also used electrocution devices to administer shocks to victims until they fainted from the pain. “When you come to your senses they start all over again,” one former detainee told HRW. “And once they’re done with you and you get your bearings, you hear other inmates screaming, and the sounds of torture are just there all day and, at some point, you start losing your mind.”

Many of those who have been released have fled Chechnya, but still face the risk of being hunted down and persecuted by Chechen law enforcers and even their own relatives as long as they remain in Russian territory.

The Kremlin has ordered an investigation of the alleged violence against gays in Chechnya, but with many victims afraid to come forward and give evidence, there is a danger that officials will eventually dismiss the reports as rumour, HRW warned.

Journalists and rights groups have taken their lives in their hands to report the persecution of gays. Chechen officials and religious leaders have repeatedly threatened Novaya Gazeta over the allegations.

Elena Milashina, the Novaya Gazeta journalist who first broke the story about the anti-gay purge in April, has fled Russia after receiving numerous threats about her work on Chechnya.

The Chechen parliament heaped scorn on the HRW, saying reports about the persecution of gays in the region could not be taken seriously. “We don’t care what journalists working in the pay of Europe write about,” it said in a statement on Friday.