As Trump heads home, Europe is left unsure of where it stands

US president Donald Trump ends his nine-day trip to the Middle East and Europe on Saturday, May 27th, with a campaign-style rally at Naval Air Station Sigonella in Sicily. Video: Reuters 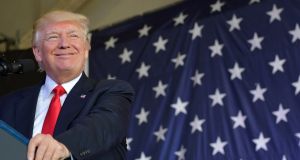 US President Donald Trump addresses US military personnel and families at Naval Air Station Sigonella after G7 summit of Heads of State and Government near Taormina in Sicily. Photograph: Mandel Ngan/AFP/Getty Images

For Donald Trump, as he set off home on Air Force One on Saturday, his trip to the Middle East and Europe had been, he declared, a tremendous success.

“We hit a home run no matter where we are,” he said. As always.

His various interlocutors in Europe were less sure. A visit all about cementing the transatlantic relationship did little more than raise doubts about where this old and once most-precious bond, for both sides, was heading.

The contrast between the warmth of Trump’s embrace of the Saudis and Israelis - and the rapturous welcome he received - and the president’s deliberate ambivalence on policy issues of key importance to European allies and hectoring of Nato members over cash was striking.

“The Saudis!” one senior, exasperated EU official muttered, very definitely off the record. “Didn’they plan 9/11...” And, as he pointed out, it was the oldest allies, Europe and Nato, that had responded with rapidity at the time to the US invocation, for the first and yet-only time, of Nato’s Article 5 commitment to coming to the defence of fellow members under attack.

Trump’s refusal while at the new Nato HQ to publicly reaffirm his acceptance of that obligation, the key pillar of Nato’s system of collective defence, was particularly galling.

“He did not make a decision not to say it,” his national security adviser Gen HR McMaster said, insisting that Trump’s participation in a ceremony to unveil a memorial to 9/11 was an implicit endorsement of Article 5. But then, why not make it explicit was the obvious rejoinder?

Trump’s silence at the G7 meeting in Sicily over its recommitment the Paris accord on global wrming measure was yet more ominous. US officials said the president, who has been sceptical of the idea that climate change is man-made and is deeply beholden to the coal industry and communities of the US, would be making a decision this week about whether the US would become the first of 195 signatory states to repudiate the landmark agreement.

“The whole discussion about climate was very difficult, not to say unsatisfactory,” German chancellor Angela Merkel said. France’s new President Emmanuel Macron had made a particular pitch to Trump saying that the continued commitment to the treaty was “indispensible for the reputation of the US”. Fighting climate change is a “strategic imperative”, a Nato report last week said.

The US leader also clashed with the other G7 leaders on Germany’s trade surplus - “very bad” Trump opined - and sanctions against Russia.

A source at the brief meeting on Thursday between the US president and the EU’s two presidents, Jean Claude Juncker and Donald Tusk, of the Commission and Council respectively, described it as polite and businesslike. Mr Trump apparently left most of the discussion, dominated by trade issues, to his senior economic adviser Gary Cohn.

But the gloves came off when he went to Nato and addressed leaders there about the failure of most of its member states to honour a political undertaking. Trump clearly, and wrongly, believes it to be a legal obligation to spend two per cent of their GDP on defence.

His now notorious physical pushing aside of the Montenegrin prime minister in the photo de famille was a clear manifestation of the president’s view that this was not a gathering of equals. Europe was not impressed.