May refuses to rule out resigning if MPs reject Brexit deal 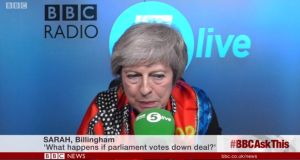 British prime minister Theresa May took calls from members of the public during a BBC phone-in on Friday. Photograph: BBC News/PA Wire

Theresa May has refused to rule out resigning as prime minister if MPs reject her Brexit deal, raising the stakes ahead of a summit in Brussels on Sunday where European Union leaders are expected to approve it. Asked three times during a BBC phone-in on Friday, the prime minister repeatedly declined to say she would carry on in Number 10 if the deal is voted down in parliament.

“I am focused on ensuring we get this deal. I believe it’s the right deal for the UK. As I’m sitting here I am not thinking about me but getting a deal for this country. That’s what drives me,” she said.

“I am going to be around the country, explaining the deal up and down the country. I think this is important. It’s not just about MPs it’s about people understanding what the country is about.”

More than 80 Conservative backbenchers have indicated that they could vote against the deal, as have the DUP’s 10 MPs who want the prime minister to scrap the Northern Ireland backstop. Dominic Raab, who resigned as Brexit secretary last week, said Mrs May’s proposals were worse than remaining in the EU.

“I’m not going to advocate staying in the EU. But, if you just presented me terms, this deal or EU membership, because we would effectively be bound by the same rules but without the control or voice over them, yes, I think this would be even worse than that,” he told the BBC.

The prime minister said he believed her deal was a good one for Britain and that it ensured that the country’s future would be in its own hands. She said that if MPs rejected the deal in a “meaningful vote” next month, there would be little point in returning to Brussels seeking to renegotiate it.

“I don’t think they will come to us and say we’ll get a better deal. I’m making sure we get this through parliament. If we don’t, what we will see is more division and uncertainty. My focus, all my focus, is getting . . . we’ve got to finalise the deal on Sunday but beyond that it’s getting the vote through,” she said.

Mrs May said she would travel around Britain in the coming weeks to take her case for the Brexit deal directly to the people beyond Westminster. Downing Street is working to persuade MPs at Westminster too and some reacted cynically to the news that John Hayes, a Brexiteer who is backing the deal, is to be knighted.

Downing Street dismissed speculation that, if the deal is voted down next month, MPs could be asked to vote again as the United States Congress did 10 years ago on the Tarp bank rescue deal, which passed on the second vote. Mrs May declined to say what her Plan B is if the deal is rejected, describing her job as persuading people it is a good deal.

“The job of an MP is to say to themselves: ‘Does this deliver on what people voted for?’ And I believe it does deliver . . . this should be at the forefront of people’s minds,” she said.

India’s supreme court refuses to put citizenship law on hold 17:33
Harvey Weinstein was not just a Hollywood titan but ‘a rapist’, trial told 17:24
Storm Gloria leaves eight dead and three missing in Spain 16:56
Eyewitness to Auschwitz: ‘We were held in the wagons like animals’ 16:34
Trump criticises ‘hoax’ impeachment trial as he departs Davos 13:47

1 Eyewitness to Auschwitz: ‘We were held in the wagons like animals’
2 Election 2020: 10 key questions to ask candidates on your doorstep
3 Election 2020: Peter Casey to stand in both Donegal and Dublin West
4 Eating out in Dublin – the homeless way
5 Which jobs do teenage girls and boys aspire to have by age 30?
Real news has value SUBSCRIBE