Spain seek clarity on Gibraltar ahead of Brexit summit 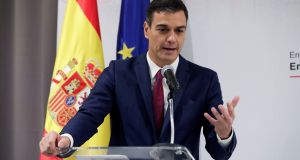 Spanish prime minister Pedro Sánchez: “My government will always defend the interests of Spain. If there are no changes, we will veto Brexit,” he tweeted. Photograph: Juanjo Martin/EPA

A last-minute Spanish threat to derail Sunday’s Brexit summit in Brussels appears to have been averted by agreement by diplomats to language which reaffirms Madrid’s veto over future EU talks which impinge on Gibraltar.

There was initial scepticism in Madrid on Friday night, and reports that Spain had demanded written commitments from London, but diplomats in Brussels were expressing confidence that the summit would not be held up.

The text of the clarification statement by the 27 EU states will not be part of the withdrawal agreement or the political declaration, which are to be approved at Sunday’s summit, and will not have to be signed off by London.

The statement is expected also to include language on fishing – the expectation that a deal will be agreed by July 2020, and that it must protect the current rights of European fleets to fish British waters – and on the possible one-year to two-year extension to the transition period.

In this regard, a clear warning is issued to the UK that it must not hold back or delay in implementing commitments made in the withdrawal agreement: “Any decision on the extension of the transition period will take into account the fulfilment of obligations by the United Kingdom under the agreement, including its protocols,” the new language is reported to say.

There was speculation in Brussels – now discounted – that Spanish prime minister Pedro Sanchez, currently on a visit to Cuba, would fly in on Saturday to meet either British prime minister Theresa May or European Commission president Jean Claude Juncker, who will be meeting on Saturday evening ahead of the summit.

Commission sources insist the latter meeting, whose agenda is still vague, will not involve any reopening of either of the documents. Nor will the summit, officials agreed on Friday.

Leaders will gather in Brussels on Sunday at 9.30am (local time) for the summit, which will initially be addressed by European Parliament president Antonio Tajani. All being well, a final press conference is scheduled for midday.

On Friday the Spanish objections appeared as if they might upset the carefully choreographed show. “After my conversation with Theresa May, our positions remain far away,” Mr Sánchez tweeted in Spanish and English on Thursday night. “My government will always defend the interests of Spain. If there are no changes, we will veto Brexit.”

In practice the Spanish cannot veto the withdrawal agreement, which will be agreed by leaders by a strong qualified majority vote (under the complicated formula in the treaty, that is 72 per cent of the 27 remainer member states, or 20 member states representing 65 per cent of the population of the EU27).

But the leaders would strongly prefer a unanimous decision and are concerned at the prospects of Mrs May facing British newspaper headlines that suggest she was humiliated by the Spanish. Everything, sources say, should be “done and dusted” by Sunday so that she can emerge triumphant from the meeting.

Spanish sources say that the dispute on Gibraltar reflects perceptions of an unwillingness on the part of the commission to privilege a Spanish vital national concern in the talks in the way that Irish national concerns and views, notably on the Border issue, were explicitly privileged. Britain’s contested sovereignty over Gibraltar is a huge domestic issue for Spanish politicians.

The Spanish were particularly angered by the dropping of language from early drafts of the withdrawal agreement – at British instigation? – that made clear that, as the EU March 2017 negotiating guidelines agreed by leaders provided, “no agreement between the EU and the UK” could apply to Gibraltar “without an agreement between” London and Spain. An explicit Spanish veto.

The EU Council’s legal service, backed by that of the commission, is understood to to have argued that that obligation is implied and still stands in the final text. Madrid says there is ambiguity and insists it wants it in writing, “to be sure, to be sure”.