‘We do not have a country called Syria any more. There is nothing left’

Life is hard for Syrian refugees in Turkey, but for many going back would be worse 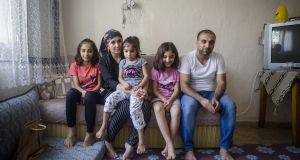 Mohammad Hamza, his wife Huriye and daughters Derin, Lorin and Tulin from Aleppo are beneficiaries of EU funded ESSN programme in Izmir, Turkey.

When Khalil and his wife Fayrouz crossed the border from Syria to Turkey in 2016, it was snowing.

They had walked from Aleppo with their children and grandchildren for five days and paid smugglers to help them to cross, only to be caught by the Turkish authorities and sent back.

Again, they paid the same smugglers and again, they crossed.

There are almost 3.6 million Syrian refugees in Turkey. Most are stuck in a kind of limbo, unable to move forward to Europe as they may have planned, or back to Syria out of fear or because they have nothing left there.

In the southeastern Turkish city of Sanliurfa, where Khalil and his family live, life is difficult. They have six children and 10 grandchildren here, but only one of their sons-in-law has a job.

Making ends meet is a daily struggle, but life is better in Turkey than it was in Syria. When the family left Aleppo two years ago, the city was destroyed.

Life was horrible; they were constantly under siege, there was no bread and no electricity or running water.

'Aleppo was like the mother of heavens. I miss the beauty of it'

One day they packed what they could and went walking for seven hours to try to escape the bombs, but even then they could not outrun the horror and went back home.

When a bomb fell on their building one night, Khalil’s youngest daughter Iman almost lost her mind with fear. He decided, “that’s enough. We are leaving.”

Today she is at the EU-funded physical rehabilitation centre, Relief International-MUDEM, with her son Hajji who has serious heart problems and mental disabilities.

Hajji’s medication, which costs 3,000 lira every three months, is being paid for by the Turkish government, but Amena is terrified that the funding will be revoked.

Her family also qualifies for the EU-funded ESSN – a cash transfer scheme providing monthly assistance to the most vulnerable registered refugees in Turkey – but with rising inflation due to the country’s ongoing financial crisis, it is becoming harder for refugees to make that money stretch.

‘Life is so difficult’

“I have a responsibility to my children and life is so difficult in Turkey that I don’t want to stay here,” she says.

Khalil’s children and grandchildren are now learning Turkish in Sanliurfa and he hopes that they can finish their education here, but he misses his home country. He would like to return one day and hopes the country will be rebuilt, though he doubts that will happen in his lifetime.

“Aleppo was like the mother of heavens. I miss the beauty of it,” he says.

His wife, Fayrouz, does not feel the same. She wants to stay in Turkey and does not want to go back to Syria because her memories have been destroyed by the war. Does she see an end to the violence?

“Only God knows. We do not have a country called Syria anymore. We lost everything. There is nothing left in Syria. So, if we are talking about an end, it is already here,” she says.

Amena Hassan believes that her children would have more opportunities and that her son Hajji would get better medical treatment if they went to Europe or Canada.

She has applied for resettlement and is hopeful, but according to last year’s figures from the UNHCR, of the 19.9 million refugees of concern to the agency in 2017, fewer than one per cent were resettled under the programme.

“It doesn’t matter which country. I just want to live in a better situation,” Amena says.

Her eldest son offered to go to Europe illegally in the hopes of making Hajji’s case known to the authorities and securing safe passage for the rest of the family, but Amena refused.

“I said no. I said if we go we will go together, if we die we will die together and if we stay we will stay together,” she says.

Mohamed Hamza and his wife Houria thought about going to Europe in 2015 when smugglers’ fees were lower, but decided it was too dangerous.

“I couldn’t risk my daughters’ lives,” he says.

Mohamed fled Aleppo nearly five years ago on his youngest daughter Tulin’s first birthday, leaving his wife and children behind until he could afford to pay for them to join him.

Today, his two eldest daughters – Derin (13) and Laurin (11) – are counting the minutes until they can go to school.

The Hamza children speak Kurdish at home and Turkish in school, but they cannot speak Arabic and Mohamed worries about what would happen if Turkey decided to send the refugees back to Syria.

“Sometimes I think, ‘why didn’t I take them to Europe years ago?’ Because I’m sure the education is guaranteed somewhere like Germany, ” he says.

People are afraid to go back to Syria.

Some of the refugees will not give their full names because of the rumours that president Bashar al-Assad is making lists of those who left during the war and that they may face persecution on their return.

Mohamed says he has heard of people being arrested, but he is not sure what is true and what is not. Even so, he believes his life could be in danger if he went back.

Does he see a future in Europe?

His wife’s cousin recently went to France through the UNHCR resettlement programme and they would consider joining her, but only through official channels.

Going illegally would not make sense, he says.

“I fled Syria because of the conflict and because it’s not secure. I can’t go illegally to Europe, it’s not secure. So for now, I am just here in Turkey and I am already integrated into the community.”

Mahmoud Abdel Karim and his family did try to go to Europe illegally.

They fled Deir al-Zour in eastern Syria four years ago when it was overrun by Islamic State and in July 2017 they paid smugglers $350 (€309) per person to get them from Izmir to Greece.

Mahmoud, his wife Hazar and their six children, tried to board the packed rubber dingy but backed out, afraid that they would drown.

“The capacity of the boat was for 20 people, but they had put more than 30 people on it,” he says.

‘They would kill us’

The Karims have applied for resettlement in Germany through the UNHCR, but the process has been stopped due to issues with the birth certificates of two of their children, which can only be fixed by going back to Syria.

That is not possible, says Mahmoud.

“They would kill us if we go back,” he says.

“Terrorists are everywhere. Blood is everywhere. I used to keep my kids in the house so that they would not see it,” he says.

More than 370,000 refugee children in Turkey are not in school and child labour is a big problem, with many families dependent on the money their children bring home.

Until recently the three eldest Karim children – Zahraa (17), Mohammed (16) and Ahmed (14) – had jobs, but now they are on the Accelerated Learning Programme which is funded by the EU and run by the Turkish ministry of education and organisations including Unicef.

It aims to get refugee children outside the education system back to school through tutoring and language support.

Zahraa is delighted to be in school instead of working – “there is no future in having to work at this age,” she says.

Their father is also happy, but without their incomes it is a struggle to put food on the table.

“The other day we could not even find a piece of bread . . . I am dreaming of leaving to guarantee a better future in Canada or Germany,” he says.

“Not to Syria,” says Zahraa. “We have nothing to go back for now.”