Man (95) charged as accessory to 36,000 deaths at concentration camp 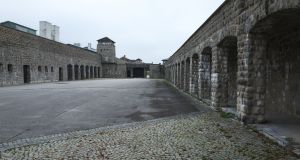 The courtyard - called ‘Garagenhof’ in German - of the concentration camp Mauthausen in Austria. Photograph: iStock

A 95-year-old Berlin resident has been charged with being an accessory to the murder of over 36,000 people at the Mauthausen death camp in Austria during the second World War, the Berlin prosecutor’s office said.

The man, identified only as Hans H. for legal reasons, is alleged to have served in a Nazi SS-company at the largest Nazi death camp in Austria from summer 1944 to spring 1945.

He is accused of having guarded inmates at the camp, about 20 km from the Austrian city of Linz, and during marches to forced labour sites, the office said in a statement.

“During the time of the crime, at least 36,223 people were killed at the Mauthausen concentration camp. The killings were mostly carried out through gassing, but also through ‘death bath actions’, injections and shootings, as well as through starvation and freezing,” it said.

The suspect was “aware of all the killing methods as well as the disastrous living conditions of the incarcerated people at the camp” the statement said. It said he wanted to “support or at least help make easier the many thousands of deaths carried out by the main perpetrator”.

The prosecutor’s office said it was bringing the charges under new laws that allow the prosecution of people involved in the Nazi “machinery of death” even if they did not personally kill anyone.

Faced with the advancing age of the suspects, Germany has stepped up prosecutions of lower-ranking individuals since the 2011 conviction of John Demjanjuk, a guard at Sobibor death camp. That case established a new precedent that no proof of a specific crime was needed to convict a defendant.

In recent years, some other former SS camp guards have been convicted but died either before the conviction was legally binding or before they had to go behind bars.

Another 95-year-old German man who is on trial for assisting in the murder of hundreds of people at the Stutthof camp, near what is now the Polish city of Gdansk, this month told the court he had never been a Nazi and was not indifferent to the suffering of inmates.–Reuters