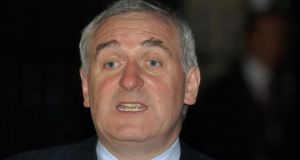 Former taoiseach Bertie Ahern has described DUP leader Arlene Foster as a great friend who he tries to get everyone to love despite it being a “bloody difficult” task.

In an address on his career in conflict resolution at a conference organised by Resolve Ireland in Dublin, Mr Ahern said he could understand why Ms Foster had a complicated relationship with some on the North’s nationalist side.

“I understand Arlene’s position and I always try to defend her,” he said. “If somebody tried to kill my father and shot my favourite uncle, I am not sure I would want to put my arms around them either.”

Ms Foster has previously said her father John – a farmer and member of the RUC – was shot at their home when she was a child, and how her schoolbus was bombed by the IRA in an attempt to kill the driver, a part-time UDR soldier.

A stand off between Sinn Féin and the DUP in issues including an Irish language act has seen powersharing in Northern Ireland, one of the issues central to Mr Ahern’s time as taoiseach, put on hiatus for almost two years.

He said he had great faith in women, who held many of the key roles in the North such as leading the DUP and Sinn Féin and holding the office of Northern secretary, and that once Brexit was resolved he expected “we will get the (devolution) show on the road in Northern Ireland again”.

He said Ms Foster was “my great friend who I try to get everyone to love her, which is bloody difficult”.

Mr Ahern said the solution to the “mess” surrounding the UK’s departure from the EU was not another referendum but to go where the country was headed, being linked to the EU in all but name.

He said the British could live in the mistaken view that they were out of the EU if it made them happy but that and that the UK was heading “fast” in the direction of retaining strong links with the bloc.

Mr Ahern said he was friends with a number of people in the British Conservative party . However, he said the Tories were “always anti-Europe, always trouble and always the bold kid in the class”.