Demands on immigration and security met but frictionless trade not mentioned 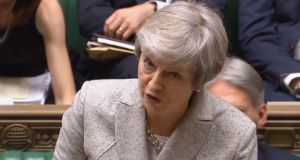 British prime minister Theresa May had to rethink her strategy in relation to the political declaration after she met European Commission president Jean-Claude Juncker. Photograph: PA Wire

When Conservative MPs recoiled in alarm at the sight of the draft Brexit withdrawal agreement earlier this month, Downing Street urged them to wait until the political declaration was published.

This document, they were assured, would sketch out a framework for the future relationship between Britain and the European Union that would satisfy the Brexiteers’ demand for an independent trade policy while guaranteeing frictionless trade.

Prime minister Theresa May would keep EU leaders negotiating late into the night on Sunday if necessary to ensure that the declaration was good enough and once it was published, wavering Brexiteers would rally to the prime minister’s colours.

May had to rethink her strategy after she met European Commission president Jean-Claude Juncker on Wednesday evening in Brussels. It became clear that, if Britain did not move swiftly to lock down the deal, it could be pulled apart by demands for changes from other member states led by Spain, France and the Netherlands.

German chancellor Angela Merkel said she would not travel to Brussels on Sunday unless a text had been presented to EU capitals by Thursday, threatening to push the negotiations into the middle of next month.

The document satisfies a number of important British demands, notably on immigration and security. But it does not mention frictionless trade, suggesting instead a spectrum of options with less friction in return for more alignment with EU rules.

It includes a commitment to explore the use of technology at borders, including the Irish Border, holding out the hope that a technological solution could make the backstop unnecessary. This promise was meant to help some Conservative Brexiteers support the deal. But as Iain Duncan Smith and Owen Paterson made clear in the House of Commons on Thursday, promises in the non-binding political declaration could not trump a commitment in the legally binding withdrawal agreement.

Labour leader Jeremy Corbyn is the only MP who voted against the Anglo-Irish Agreement in 1985 who is still in the Commons and this week he revived his alliance with the DUP to denounce the backstop as a regulatory border in the Irish Sea.

Labour claims its policy of a permanent customs union with the EU would make the backstop unnecessary, although it opposes full membership of the single market. One way or another, the opposition of Conservative Brexiteers and Remainers, the DUP, Labour and other opposition parties means that the prime minister is still a long way from the majority she needs to approve the Brexit deal.