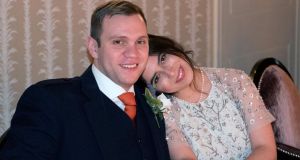 Clemency for a British academic jailed for life in the United Arab Emirates on a spying charge is being considered by the Gulf state’s leaders, an official announced as he defended the nation’s judicial system.

Diplomatic efforts to free PhD student Matthew Hedges are being led by foreign secretary Jeremy Hunt amid an outcry after the 31-year-old was handed the sentence earlier this week.

The Durham University researcher’s wife, Daniela Tejada, has lobbied for his release and won assurances from Mr Hunt that the government is “now standing up for” her husband, after she claimed it had initially put foreign relations above his liberty.

In a statement at the UAE embassy in London on Friday, ambassador Sulaiman Almazroui praised the closeness between the two nations as he said clemency is being considered for the “extremely serious case”.

“Mr Hedges’s family have made a request for clemency and the government is studying that request,” he said.

“Because of the strength of that relationship we are hopeful that an amicable solution can be reached.”

He also made efforts to defend the judicial process, denying it was a “five-minute show trial” and claiming three judges evaluated “compelling evidence” over three hearings to make their ruling.

He did not address whether the academic was given adequate legal representation throughout the process, which Ms Tejada has said he lacked.

She swiftly rebuked the ambassador’s defence, saying her husband had been held in solitary confinement for more than five months without charge or lawyer, and when he did receive consular access he was not able to “talk openly”.

“The judicial system in the UAE and the UK cannot be compared,” she said in a statement.

“We have asked for clemency, we will wait to see what happens.”

The UAE has a history of issuing a wave of pardons in anticipation of its national day, which falls on December 2nd.

Despite the diplomatic efforts being made, Ms Tejada said her husband remains in fear that he will have to serve the entirety of his sentence, after speaking to him in a brief phone call on Thursday night.

“He is not well. He mentioned that his panic attacks have become worse than they were before. However, he did say that he has access to a doctor,” she told the BBC.

“I wasn’t allowed to know where he is, so still don’t know anything about his whereabouts, and I think he’s just absolutely terrified at the idea of having to spend the rest of his life behind bars for an offence he hasn’t committed.”

There are hopes that the UAE will show some leniency, with the head of its foreign ministry’s legal department, Abdulla al-Naqbi, also saying the nation wants to find an “amicable solution”.

However, he added that “compelling and powerful evidence” had proved espionage, including computer analysis and an alleged confession.

Ms Tejada has stressed her husband’s innocence and said the Middle East expert, who was finishing his thesis, was the victim of a “misunderstanding” while carrying out research.

Mr Hunt said he had seen “absolutely no evidence” to support claims that Mr Hedges was spying when he visited Dubai earlier this year, and he threatened “serious diplomatic consequences” if he was not freed.

The cabinet minister said on Thursday night that he had had a “constructive conversation” with his UAE counterpart, Sheikh Abdullah bin Zayed.

But this came after he had previously voiced surprise at the life sentence handed to Mr Hedges on Wednesday, which came despite his discussions with Crown Prince Mohammed bin Zayed a little over a week earlier.

Mr Hedges, originally from Exeter, was arrested at Dubai airport as he tried to leave the country on May 5th.

Prof Stuart Corbridge, vice-chancellor of Durham University, said there was “no reason to believe that Matt was conducting anything other than legitimate academic research”.

Mr Hedges was given 30 days to challenge the court ruling, and Ms Tejada has launched a petition on Change.org which has gathered more than 160,000 signatures. – PA

1 Varadkar promises ‘early retirement pension’ amid backlash over gap
2 Search for missing remains of Mulready-Woods (17) continues
3 Boris Johnson wishes Harry and Meghan ‘very best for future’
4 RTÉ will not include Sinn Féin in second TV debate despite legal threat
5 Election 2020: How much of an impact will the environment have?
Real news has value SUBSCRIBE