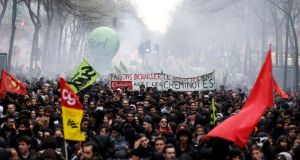 State-run rail company SNCF, which Mr Macron wants to overhaul, said 48 percent of the workers needed for the network to run smoothly were absent, as they joined the protests against plans to trim benefits including job guarantees and generous pensions.

Just one in four trains ran in the Paris region, while one in eight high-speed TGV trains were operating. At Gare du Nord, Paris’s busiest station, platforms were so crowded that some commuters fell on to the tracks. Other stations were plunged into darkness, the lights and ticket machines switched off.

“I do understand why they’re striking,” said Marie Charles, a Paris commuter. “But today is my first day in a new job so I have to admit I could have done without the strike.”

Outside Gare de L’Est, crowds of SNCF workers denounced the government and set off flares that filled the area with smoke.

Many students, who have launched their own demonstrations against education reform, joined the protest, and some workers in other sectors downed tools in sympathy with the rail workers. Others plan to do so in the coming days.

The four main rail unions plan to strike for two days out of every five for the next three months – a total of 36 days of disruption – to fight a shake-up of monopoly SNCF before it is opened to competition in line with European Union rules.

The protests come as France prepares to mark the 50th anniversary of the student-led riots of May 1968, when the entire economy came to a virtual halt. The work stoppages so far pale in comparison with those events.

The last French leader to square off against the rail unions came off worst. The strikes of 1995 paralysed France and forced prime minister Alain Juppé to pull the measures – a defeat from which he did not recover.

The unions are broadly weaker now and divided over how best to handle Mr Macron’s many social and economic reforms – a division Macron hopes to be able to exploit to his advantage.

If the 40-year-old president succeeds it will set the tone for other reform plans, including revamping the education system and overhauling pensions. Mr Macron has already faced down the unions to ease labour laws, making it simpler to hire and fire.

Speaking to parliament, prime minister Edouard Philippe said the way the SNCF operated could not continue. “I respect the strikers because going on strike is a constitutional right... But ... we also need to respect the millions of French who want to be able to get to work,” he said.

Transport minister Elisabeth Borne urged unions to negotiate, but union leaders hit back. “The railway workers are not doing this for the fun of it,” said Philippe Martinez, head of the hardline CGT union, the biggest among railway workers.

SNCF president Guillaume Pepy said the strike was likely to cost the company €20 million a day in lost revenue at a time when it is already adding €3 billion to its overall debt pile of €47 billion every year.

In a bid to boost efficiency, the government wants to end rail workers’ jobs-for-life, automatic annual pay rises and early retirement rights – benefits that date back to the nationalisation of the SNCF in the 1930s. Under government plans, these historical benefits would not be applied to new rail staff.

The government has painted the rail workers as enjoying outdated privileges, a notion the unions reject. “The salaries aren’t amazing, the work conditions are difficult, and for some it means working every other weekend,” Mr Martinez said.

Mr Macron will need to keep the public on his side if he is to defy the unions and push the reforms through. An Ifop poll on Sunday showed that just over half of French people view the strikes as unjustified.

Mr Macron wants to transform the SNCF into a profit-maker. The unions say its debt was caused by excessive investment in France’s high-speed network and accuse Mr Macron of paving the way for privatisation, which officials deny.

The government has sought to ease tensions with assurances that the arrival of foreign competition on French rail tracks, pencilled in for gradual rollout from 2020, can be delayed.

As well as testing Mr Macron’s mettle, the rolling strike will also challenge the resolve of unions to maintain a common stance. The Communist-rooted CGT wants the industrial action to spread to other sectors but has so far seen limited support.

Some energy sector workers walked out on Tuesday in protest against the planned liberalisation of the power sector, but there was little impact on power output.

Air France workers also went on strike over pay on Tuesday, although the company said it expected 75 per cent of flights to operate as usual. – Reuters