In Berlin, where one in five is on the dole, talk of change is being followed closely 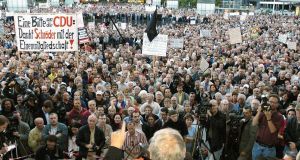 A protest in Leipzig in 2004 against the then SPD government’s welfare cuts. Photograph: Jens Meyer/AP

Nights are long in Kreuzberg, according to a 40-year-old song about the colourful Berlin neighbourhood. But not as long as the month-end queue at the Kreuzberg savings bank.

Thursday was “Geldtag” – money day – a bright spot in the Berlin calendar when, once a month, every Berliner is a millionaire for a day, in particular the city’s welfare recipients. The shops are full, the pubs even fuller, as people live it up and forget their troubles for a while.

One in 10 Germans lives from welfare but in the capital city it is one in five – the highest in country. That’s why Berliners – in Kreuzberg and elsewhere – have been following closely this week’s debate about reforming the basic dole payment of €416 a month.

“It’s enough to exist, but not enough to live,” says Michael, as he folds banknotes carefully into his wallet. The 52-year-old carpenter with a weathered face and an earring injured himself a decade ago and since then has lived on welfare.

“Things are really tight at the end of the month, particularly if there’s a big electric bill,” he says, “and you can forget about participating in cultural life”.

It’s 15 years since the centre-left Social Democratic Party (SPD) reformed German welfare, but the shockwaves can still be felt today. The economy revived but the party has never recovered millions of supporters who viewed the reforms as cruel and treacherous.

Now the new SPD labour minister Hubertus Heil has called for fresh thinking on welfare, to allow a people live a “life of dignity” rather than getting “just enough so they see no alternative to a life in poverty”.

“Germany hasn’t been doing this well for many years,” he wrote in Thursday’s Frankfurter Allgemeine daily, “but many feel the wealth is spread unevenly”.

To tackle this he has promised €4 billion to finance a “social labour market”: allowing people top up their welfare payments with community work, and financing more training courses to return them to full-time employment.

Left-wingers in the SPD, wary of returning to power this month with chancellor Angela Merkel, argue that reform of the 15-year-old system is overdue. Berlin’s SPD mayor Michael Müller has gone even further, proposing to triple welfare payments to €1,200 monthly if people agree to help out in kindergartens, retirement homes or parks.

For SPD left-wingers, welfare reform would solve two problems at once: get rid of the hated “Hartz” dole payments – named after the chairman of the commission who recommended the previous reforms – and give the centre-left party a chance to bounce back in polls for defending the little guy. Given the SPD once again controls the all-important federal finance ministry, what better time to push for change?

There are two obstacles to this. First, Merkel’s centre-right Christian Democratic Union (CDU) is up in arms, warning of a state-subsidised army of workers who will undermine small businesses.

The second obstacle to reform is the SPD federal finance minister, Olaf Scholz. Just weeks in office, he has vowed to continue the balanced budget policies of his CDU predecessor, Wolfgang Schäuble. He says he will tolerate evolution – but not expensive revolution – of the welfare system.

Rather than boost the dole, the conservative SPD politician argues that “the number of citizens who are long-term unemployed has to drop significantly”.

Even he, however, doesn’t question the need to think anew about a welfare system that, according to a survey by the federal labour office, leaves 30 per cent struggling to cover the basics.

As the queue outside grows and grows at the Berliner Sparkasse, the bank’s manager Frank Karschunke glances at a silent television news station reporting on the SPD’s welfare reform plan.

His staff are on the frontlines of Germany’s tough welfare reality: the surge at month-end is accompanied by regular calls to the police and attacks on staff. Some staff are jaded, he says, while many others are off sick.

“We have everything here, from welfare recipients who drive luxury cars to those who’ve fallen into a hole and have only €4 to withdraw at month-end,” he says. “I see quite a few welfare recipients working on the black market, in shops and cafes round the corner.”

Outside beside the cash machines, Michael the carpenter mentions casual work too, but sees it as part of a vicious circle. “If we had just €150 more a month it would make all the difference because people would have more to spend instead of having to earn under the table to make ends meet,” he says.

What does he make of the political welfare debate? “Is this really about change for the better,” he wonders, “or political polemic to boost their profile?”