Website promotes adoption as an option in crisis pregnancies 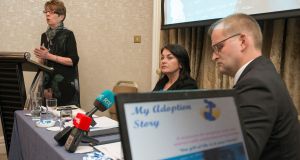 Prof Patricia Casey speaking at the launch of myadoptionstory.ie website, a resource for women with crisis pregnancies who are considering their options, with website founder Dr Fidelma Healy-Eames and Minister of State John Paul Phelan. Photograph: Dave Meehan /The Irish Times

Women in crisis pregnancies have been urged to think of adoption by a new group and website dedicated to publicising the option.

“It’s not a solution for everyone, but we’re almost afraid to talk about adoption now,” said Minister of State John Paul Phelan, who spoke at the launch in support of the initiative. “It should be back on the radar and it should be discussed.”

Mr Phelan was critical of some commentary on social media about adoption as an option in crisis pregnancies and described it as a “wonderful option for some people”.

He was speaking at the launch in Dublin of myadoptionstory.ie, a website designed to promote the option of adoption for women in crisis pregnancies.

The organisation was set up by former Fine Gael senator Fidelma Healy-Eames, who lost the party whip in the Seanad in 2013 over her opposition to the Protection of Life in Pregnancy Act.

“Why has adoption gone off the radar?” Ms Healy-Eames asked. “You’d swear we had State-sponsored abortion, that’s what it’s beginning to look like.”

Ms Healy-Eames has two adopted children. She said adoption had “lifted the cloud of childlessness from us . . . and gave us a family”.

“Our message to pregnant women in crisis is that the gift of life is in your hands,” she said.

She said that “adoption and fostering keeps the door open to a future – unlike abortion”.

The launch was attended by several TDs who are opposed to the repeal of the Eighth Amendment, including Éamon Ó Cuív, Mattie McGrath, Anne Rabbitte, Peter Fitzpatrick, Declan Breathnach and Danny Healy-Rae.

Prof Patricia Casey, a well-known psychiatrist and anti-abortion advocate, also spoke about her experience of adopting two children. She said some repeal campaigners seemed to believe that abortion was a better option than adoption – “that death is better than life”.

She said she hoped the website would help to dispel some of the myths about adoption, which was utterly different to the sort of adoptions that took place in Ireland in the past.

Ms Healy-Eames said she was dismayed that the Government was campaigning in favour of a repeal vote. She said a referendum was different from an election, and the Government should “step out” and not campaign either way.

She also said there were 90,000 people in Ireland who have been adopted. The website features a number of stories of adoptions and is seeking to publicise others.