Theresa May displays grit of the old-fashioned English footballer

Janan Ganesh: PM’s survival is an astonishing tribute to her ability to absorb stress 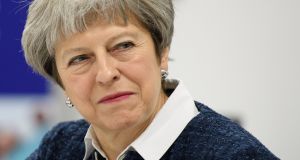 British prime minister Theresa May: If she owes her longevity to the roguish police line-up of bad alternatives, she can also claim to have come into her own of late. Photograph: Leon Neal/PA Wire

On recent travels in southeast Asia, Brexit was an obscure commotion at the far edge of the Eurasian land mass. Local interest in British politics focused on its zany characters, such as Boris Johnson, the foreign secretary, and the question of when one of them will become prime minister to enhance the gaiety of all nations. Still they wait.

It takes the perspective of physical distance to remember that Theresa May’s survival is astonishing. The British are blasé about it, having seen her withstand five existential crises in less than a year: a bungled election, a wooden response to the Grenfell Tower fire, a hoarse speech on a disintegrating stage, a double cabinet resignation last November and a failed attempt to tweak the same cabinet.

If anything is new, it is that her shopworn premiership can now aspire to more than mere survival. The change is recent and subject to reversal, but she seems to have broken the cycle of crisis and narrow escape to achieve, if not comfort, then at least relief from rolling conjecture about her own position. The Labour party is distracted. Johnson no longer stalks her in plain sight like a salivating dauphin. Betting exchanges overrate the enthusiasm of Conservative MPs for the backbencher Jacob Rees-Mogg (another eccentric of surprising renown in distant lands).

Without any great change in the opinion polls, the maximum prognosis for May’s leadership has lengthened from the spring of 2019, just after Britain leaves the EU, to somewhere up to, if not including, the general election in 2022. The former remains more probable but the tentative floating of the second is a mark of her progress since January, when various cabinet members refused to be moved from their jobs. A prouder prime minister, aware that the defining power of the office is to hire and fire, might have resigned.

If May owes her longevity to the roguish police line-up of bad alternatives, she can also claim to have come into her own of late. The diplomatic confrontation with Russia, like the Cambridge Analytica scandal, played to her experience with the Hobbesian side of politics. Matters of espionage and personal data are so much meat and drink to a woman who ran the home office for six years.

Another maladroit prime minister, Gordon Brown, lasted longer than he might have because the crash gave his decade at the treasury a sudden relevance. “This is no time for a novice,” he said, lethally, about his young challengers in 2008. Exchange “novice” for “maverick”, and May has an unanswerable barb against her more colourful rivals, at least as long as security threats raise the stakes of Westminster politics.

There might also be some British underdog-worship at play here. In a nation that prizes grit, she has shown lots. Her principal talent is the absorption of stress. There is something of the old-fashioned English footballer about her efforts to work around her own limitations. Her premiership is the political equivalent of covering every blade of grass (before losing to defter continental opposition). It was when she was a swaggering overdog, complicit in triumphalist headlines against Brexit “saboteurs”, that voters withheld the parliamentary majority that seemed hers for the asking.

She will never recover from that election. The Tories would cap their growing international reputation for screwball comedy by allowing her to contest the next one. This is still a sandcastle government that rests on votes from the Democratic Unionist party of Northern Ireland and celebrates when something as routine as a spring statement, such as last month’s, passes without farce. Its negotiations for a trade deal with the EU will be an even lengthier tryst with reality than the exit talks were. As disappointments mount, malcontents will look to Johnson, Rees-Mogg or someone else for leadership.

And still the thought persists that something has changed over the past month. A prime minister who had lived hand to mouth has eked out time and space to breathe. Commentators no longer assume the next crisis will fell her, having made several such predictions before. Tories no longer say that things could not possibly be worse under different leadership, having done so as recently as January. Ministers no longer flaunt their dissent. Nor is there any great pressure on her from the public.

In a sense, Britain is doing what it should have done in the Europe referendum: choosing the status quo from a menu of flawed options. May’s survival is no less remarkable for our being used to it. – Copyright The Financial Times Limited 2018