Keira Bell had taken case against the Tavistock, a youth gender identity clinic 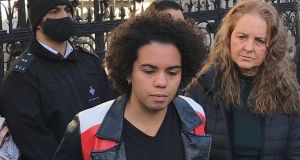 Keira Bell (23), who began taking puberty blockers when she was 16 before ‘detransitioning’, outside the court in London. Photograph: Sam Tobin/PA Wire

A British court on Tuesday cast serious doubt on whether under-16s will continue to be able to take puberty-blocking drugs in a landmark trial that has fuelled global debate about the age at which a child can choose to transition gender.

In a ruling at Britain’s royal courts of justice, the presiding judge Ms Victoria Sharp ruled that it was “highly unlikely” that a child of 13 or under “would be competent to give consent to the administration of puberty blockers”.

Ms Sharp, sitting with Lord Justice Lewis and Mrs Justice Lieven, added it was “doubtful” that 14- and 15-year olds would be able to understand and “weigh the long-term risks and consequences” of taking puberty blockers.

The ruling marked a partial victory for Keira Bell (23), who took puberty blockers at 16, in her case against the Tavistock & Portman NHS Foundation Trust, which runs England’s only youth gender identity clinic.

Ms Bell, who “detransitioned” in her early 20s and now lives as a woman, fears the treatment may have damaged her ability to have children. She had argued for puberty blockers to only be prescribed with a court order for under-18s, which the court’s ruling stopped short of confirming.

“I’m delighted at the judgment of the court today, a judgment that will protect vulnerable people. I wish it had been made for me before I embarked on the devastating experiment of puberty blockers,” she told reporters outside the court.

Her lawyer Paul Conrathe said the decision “opens the floodgates for expensive clinical negligence claims” and called on the UK government to launch a public inquiry.

“It is also a damning indictment of clinical practice at the Tavistock,” he added in a statement.

A spokesperson for the Tavistock and Portman NHS Foundation Trust said it was disappointed with the judgment, but pledged to appeal in a case likely to end up before the supreme court.

“We understand that the outcome is likely to cause anxiety for patients and their families,” the trust said in a statement.

The case comes as increasing numbers of adolescents globally seek to change gender, dividing those who fear doctors are too hasty in prescribing puberty blockers and cross-sex hormones and those worried about access to medication they deem life-saving.

Courts and lawmakers from Canada and the United States to Mexico and Brazil are having to answer questions about parental rights and the age at which someone can make medical decisions.

The case at the Royal Courts of Justice has become a lightning rod for concerns about a nearly 30-fold rise in child referrals to the clinic in the past decade, to 2,560 last year.

The World Professional Association for Transgender Health, a global body of doctors specialised in treating trans people, says puberty blockers may prevent the negative mental impact of gender dysphoria in puberty. It described them as “fully reversible” but acknowledged concerns about possible impacts on bone development and height.

“We at Mermaids see every single day the life-saving effect that hormone blockers can have.”

Currently in Britain under a 1985 court ruling, children under the age of 16 can consent to medical treatment if they are deemed to understand and fully appreciate the implications, in what is known at the Gillick competence test.

Opponents of puberty blockers said they wanted to make sure adolescents understood the drugs’ long-term consequences.

The age at which someone can choose to transition is fuelling a controversial debate globally.

In Canada, a mother is fighting a legal battle to stop her 17-year-old child undergoing a double mastectomy, while a court in British Columbia in January ruled against a father who tried to stop his 15-year-old from treatment to transition to male.

A 2019 battle in Texas between two parents over the gender identity of their child led some state legislators to propose bans on prescribing puberty blockers and cross-sex hormones, with bills under consideration in Texas and Alabama.

In January, Brazil lowered the age requirement for hormone therapy from 18 to 16 – although under-18s must have the consent of a parent or guardian – while Mexico last year said children should be able to access puberty blockers.