Indian farmers march on Delhi in protest against agriculture laws 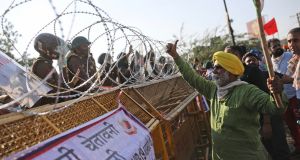 An elderly farmer argues with policemen standing by a barricade as they attempt to move towards Delhi, at the border between Delhi and Haryana state last Friday. Photograph: Altaf Qadri/AP

Hundreds of thousands of Indian farmers have marched upon Delhi and set up vast camps blocking entry to the city in protest at agriculture laws they say will destroy livelihoods.

More than 300,000 farmers marched from the states of Punjab and Haryana – on foot and in convoys of tractors – at the weekend to reach the Indian capital for what they described as a “decisive battle” with the central government.

As the farmers reached Delhi, some managed to enter but the majority were stopped by barricades and barbed wire erected by police on major roads into the city. The farmers set up camps along five major roads, building makeshift tents and setting up fires with a view to staying for months if their demands are not met.

Police had used tear gas and water cannons against the marching farmers and ripped up highways to stop tractors and protesters moving forward. However, the Delhi government denied police permission to convert nine stadiums into temporary jails for farmers. “Farmers are not criminals,” the city government said.

The farmers are protesting against a series of agricultural laws that see the deregulation of crop pricing which farmers say will leave them at the mercy of big corporations. The government has argued that the laws are necessary reforms that give farmers more autonomy over the selling of their crops and will break big unfair monopolies.

Though farmers’ unions have been protesting in Punjab for the past two months, holding marches and blocking roads and train lines, they said they were organising the march to Delhi to force the government’s hand. Unions want to repeal the laws, which they say are anti-farmer and pro-corporate interests.

Farming is one of the biggest employers in India, with more than 40 per cent of the population working in agriculture.

Among the farmers who marched to the border was Ratam Mann Singh (61), from Haryana, who is president of the Indian Farmers Association for the state. He said: “I took part in this protest to the Delhi border because the central government has sold out the farmers with these new laws, which did not have any consultation or input from farmers. If they are passed then the farmers’ rights will be finished.”

Ms Singh said many of the farmers had brought enough food, supplies and blankets to last for up to three months. “We are prepared to stay here for as long as it takes, even in the cold winter, we are ready for that. The farmers of India have been betrayed,” he said.

On Saturday, the union minister, Amit Shah, said the government was willing to deliberate on “every problem and demand” of the farmers. Talks have been scheduled for December 3rd.

The farmers’ demands have proved contentious. Among them is the demand to remove a fine for stubble burning, the practice of setting fields alight to remove the old crop. While farmers say it is unavoidable, stubble burning is a major contributor to the toxic air pollution that engulfs Delhi and northern India in the winter months and has been made illegal as a result. – Guardian