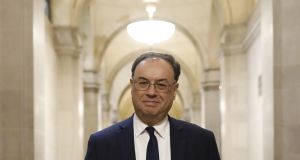 Failure to reach a free trade agreement with the European Union would cause more long-term damage than coronavirus to the British economy, Bank of England governor Andrew Bailey has told MPs. Mr Bailey said that although coronavirus would deliver a dramatic short-term shock to the British economy, a no-deal post-Brexit scenario would cause more lasting damage.

“It takes a much longer period of time for what I call the real side of the economy to adjust to the change in openness and adjust profile of trade,” he told the Commons treasury committee on Monday.

Mr Bailey’s comments appeared to contradict chancellor of the exchequer Rishi Sunak, who said on Sunday that although failure to reach a deal with the EU would have a big immediate impact, coronavirus would have a more important impact next year.

Talks between Britain and the EU resumed by video conference on Monday amid speculation that Boris Johnson and European Commission president Ursula von der Leyen would speak towards the end of this week. Alex Chisholm, the top civil servant at the cabinet office, told MPs on the public accounts committee that some disruption would be inevitable in January and that his biggest worry was that small traders who exported to the EU would not be ready.

“Trader readiness has improved but needs to improve further,” he said. “Particularly when we think about people looking to trade with Europe, to export to Europe, we’ve been told by the European Commission’s public announcement that they’ll be upholding full import controls for goods coming from Great Britain. It’s important obviously that people wishing to export do make the necessary preparations.

“Obviously there are only about five or so weeks to go and that is a relatively small amount of time for the remaining preparations to be undertaken, not just by us but by local authorities and businesses and so on. And if there is to be an agreement of [a free trade agreement] and a matching agreement which we would hope to see from the joint committee, there’s a relatively small amount of time to be able to act on that.”

MPs heard that up to 100,000 small businesses had not yet applied for an EORI registration number, required to export to the EU from January. Tim Reardon, head of EU exit at the Port of Dover, told the House of Lords subcommittee on EU goods that he did not know if businesses were prepared for the changes they would face.

“We’ve no visibility of readiness further up the supply chain to have the documents ready to get through the port,” he said. “The requirements that UK exporters and French importers will need to meet to get goods from the UK into France have been well publicised for many months now. The systems exist and have been tested.

“We work on the basis that lorries will need to be ready and that exporters in the UK and importers in France will have a clear interest in ensuring that when they send their goods out they’ve done the necessary declarations.”