Are you crinkly or squiggly? And 19 other questions for the Irish Border

The Border on getting started, its worst towns, its promotion and its favourite Brexiteers 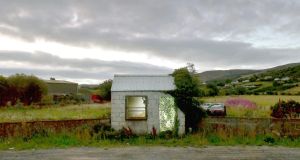 In the wake of the Brexit referendum, the Irish Border, or the UK Border in Ireland, or Britain’s Border with the EU (it has many names), realised that lots of people in the UK had forgotten about it. It did what we all do when we feel forgotten about. It went on social media. It established a Twitter account, @borderirish, and began tweeting its views on Brexit-related problems. Now it has written a book, even though it doesn’t have fingers so shouldn’t be able to hold a pen.

My editor would like me to meet and interview this newly sentient piece of colonial history, but this is a problem. First, having me stand in a field and shout at a geopolitical construct may be hilarious to my editor, but it might not be hugely appetising for locals. Second, I can’t travel north, because years of living in the capital have given me a partitionist mentality, and I think the island stops at Dublin Airport. Meanwhile, the Border can’t travel south without causing an international incident and frightening mapmakers.

Consequently, we have done this interview by electronic mail, so I can’t offer my usual descriptions of what the Border is wearing (a jaunty gun tower?) and engage in dodgy pop psychoanalysis of its body language (it’s very squiggly). You’ll just have to figure that out for yourself.

Tell me about your early days. How did you get started as a border?

Well, I went to a very exclusive bordering school, along with lots of other boarding borders, and then, in my last year, the careers-guidance teacher said to me, “There’s this job coming up in Ireland,” and I replied, “I was hoping for somewhere a bit warmer and less angry,” and he said, “Look, it’s only for a few years, until they work out what they’re up to, and then you can move on to a better job. It’ll be good experience.” That was nearly 100 years ago. And I’m still here, obviously. And it’s not any warmer.

Were you always sentient?

Always sentient, but not always vocal. Borders aren’t encouraged to speak, but there comes a point, when everyone’s talking about you and most of them haven’t a notion what they’re on about, when you need to just step forward and tweet.

Are you crinkly or squiggly? Also why are you so crinkly and squiggly?

Squiggly is the common and correct colloquial term. Technically, I’m meandering. The old story goes that I’m the shape I am because I follow the old county boundaries. Actually, I was meant to be two straight lines at right angles coming down from Derry and then across to Dundalk, but the fella who was drawing me on the ground was chased by people he owed money to, so now I’m all over the place.

How do you hold a tablet and/or device? Do you have fingers?

When I started on Twitter I hacked into the internet through a copper cable in Clady and just thought stuff really hard , and it appeared as tweets. Then I got more ambitious, and my friend Jean let me use her iPad. I hit it with a wee stick to make tweets.

Via inner rage and despair, mostly. Borders are not encouraged to have thought, emotions, or indeed any manifestation of sentience. It can be a blank and cruel existence, just silently dividing things and stopping stuff happening for no good reason other than the relatively arbitrary and sudden delineation of difference. A bit like the humans who put us here, I suppose. I’d have gone on not expressing myself were it not for Brexit.

Could you tell me what the worst Border towns are?

Are you a Protestant Border or a Catholic Border?

Yes. How did you guess?

Tell me a bit about some of the other characters in your book – Rupert, Jim, Jean and her dog, Seanie, and his dog.

So, Rupert is not Rupert’s real name. He disguises his true identity, which is a bit weird, to be honest. Rupert is a negotiator for the British government, and he used to come to see me to solve me. He’s been sacked since, because he worked for Theresa May, and Boris Johnson decided Rupert wasn’t evil or stupid enough to work for him.

Jean is my best friend. She lives near here, and she’s a wise woman, with a sharp mind and a sharper tongue. Her tongue would cut you in two and sew you back together again before you noticed. She has a wee dog that she walks back and forward over me. I think I like the wee dog.

Seanie has a dog too. It’s bigger. It’s called F**k Brexit. I suppose that’s an unusual name for a dog. It causes him awful problems, because the dog thinks everybody round here is calling it all the time.

Do you know the Scottish border? Is there a chance he/she will also be put back to work?

What’s your favourite other border? Maybe give me a top three.

I like the Mexican-US border, because it texts me all the time to say really cool stuff like, “Hey dude, snap on the hairy blond mother f****r,” and, “We kick ass, Irish.”

The Belgian-Dutch border has the most beautifully confusing bits of border lineage in the world. Very nice.

But my favourite border is where Denmark and Sweden meet, at Øresund. There’s a bridge that is sleek and wonderful, and then it dips down into a tunnel under water. I love that bridge. When I say love I really, really mean love.

Why are you causing such a fuss?

Just for the bit of divilment.

Had you plans for your retirement?

I was hoping for an EU-funded Museum of Me, with display cabinets of all the different types of grass and concrete and tarmac and brambles that are strewn along my length. The gift shop would have been fantastic. Oh well.

Isn’t it a promotion being made the UK-EU border as opposed to the UK Border in Ireland?

I can’t pretend I don’t like that bit of it. I have Duolingo tortured learning Estonian, just in case.

Daniel Hannan is very funny. He does this big puffy chest thing and says stuff really seriously. I love it when people perform wisdom. It’s cute.

Do you miss Theresa May? Has she been to visit?

I visited her at Chequers one time. It’s in the book. She’s a panicky soul. Still, she’ll be laughing now at Boris doing the job even worse than she did.

What are your thoughts on Boris and Dominic Cummings?

Isn’t it possible you might look quite dapper festooned with “infrastructure”? I mean, you’re in the nude; what’s with that?

No, no. Au naturel is the only mode for me. I like to feel the breeze blowing through my grass. I had enough of the brutalist phase, thank you very much. Too much sadness and misery in those memories.

In a way you’re better at bordering than ever before – not only dividing this country but also helping to divide Britain. Does this bring you pride?

You’d think the British would have learned the lesson, since I’m more their Border than anybody else’s. But, no, they had to go and put a big division right down the middle of their country just for the hell of it. What can you do?

What’s the worst that could happen?

An ice-cream shortage. I’ve stockpiled, but freezer capacity is limited.

Finally, before I go, have another go at solving yourself, if you don’t mind.

Easy. Leave me as I am. Cancel Brexit. Pretend it never happened. Failing that, bribe me with tickets for Mozart concerts and a big f**k-off pile of ice cream.

I Am the Border, So I Am is published on October 31st by Harper Collins