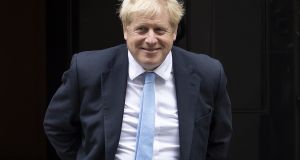 British prime minister Boris Johnson has postponed his weekly cabinet meeting until Wednesday afternoon amid signs that Britain and the European Union are closing in on a Brexit deal.

Downing Street said the meeting, which will happen at the same time as Michel Barnier is due to brief EU ambassadors, will give the prime minister an opportunity to update ministers on negotiations.

Mr Johnson and his team have been in regular contact with the DUP as the talks in Brussels have intensified but Arlene Foster dismissed suggestions that her party was under pressure to make concessions.

“What we will do is what’s right for Northern Ireland. And we will never do anything that will damage the constitutional and economic integrity of the United Kingdom. ”

Mr Johnson’s hopes of passing a deal through parliament received a boost on Tuesday evening when Steve Baker, chairman of the hardline Brexiteer European Research Group suggested that he could support it. Leaving Downing Street after an 80-minute meeting, Mr Baker said he had enjoyed very constructive talks with the government.

“I am optimistic that it is possible to reach a tolerable deal that I am able to vote for,” he said.

Earlier, Commons leader Jacob Rees-Mogg said he believed that “everybody’s desperate to finish this” and that the votes were there to get Mr Johnson’s deal through the House of Commons.

Are the DUP a factor?

The DUP’s 10 votes remain crucial for the prime minister, however, because their endorsement of any deal would help to unlock the support of almost all Conservative Brexiteers. With up to nine Labour MPs representing Leave-voting seats willing to back a deal, the DUP’s support is likely to give Mr Johnson a majority in the Commons.

If a deal is agreed, the government has indicated that MPs will sit on Saturday for a “meaningful vote” on its ratification. But Mr Rees-Mogg said on Tuesday that it was too soon to say for certain if the Parliament would hold its first Saturday sitting since the Falklands war.

Scotland’s first minister Nicola Sturgeon told her Scottish National Party’s annual conference that the prime minister’s plan would leave Scotland in a worse position than any other part of the UK.

“If there is to be a deal, it seems inevitable that it will include a process to allow Northern Ireland to decide if and for how long it will stay aligned to the single market and customs union. And that’s exactly as it should be. But think about what that will mean,” she said.

“Scotland will be the only country in the UK to be taken out of the EU against our will and with no say over our future relationship with Europe. ”