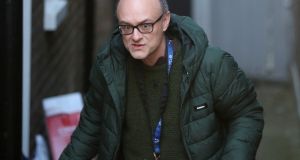 The Labour Party has urged the UK government to stop the prime minister’s chief political adviser, Dominic Cummings, from attending meetings of the secret scientific group advising on the coronavirus pandemic over concerns that its independence has been compromised.

A leaked list revealed by the Guardian shows that both Mr Cummings and a data scientist said to have worked on the Vote Leave campaign, Ben Warner, were among 23 attendees present at a meeting of the Scientific Advisory Group for Emergencies (Sage) on the day Boris Johnson announced a nationwide lockdown.

Various attendees of Sage told the Guardian that both Mr Cummings and Mr Warner had been taking part in meetings of the group as far back as February and had not merely observed but actively participated in discussions about the formation of advice.

Jonathan Ashworth, the shadow health secretary, said there were significant questions for the government to answer over the credibility of its decision-making and how non-scientists have influenced policy, calling for minutes of meetings to be made public.

“The concern is that political advisers have influenced the debate,” he told BBC Radio 4’s Today programme. “So the way to clear this up is for all the minutes to be published ... People have not got full confidence that the government is being entirely clear and transparent.”

Downing Street said Mr Cummings and Mr Warner had attended some Sage meetings and continued to listen to others now held online.

“Occasionally they ask questions or offer help when scientists mention problems in Whitehall, ” a No 10 spokesman said. “It is factually wrong and damaging to sensible public debate to imply [Sage] advice is affected by government advisers listening to discussions.”

Mr Ashworth, however, said this claim should be substantiated with evidence and that questions remain over key government decisions.

He suggested the UK was slow to go into lockdown and queried why large events such as the Liverpool v Atletico Madrid football game and the Cheltenham festival – attended by more than 250,000 people over four days from March 10th – had been allowed to go ahead.

Throughout the outbreak, ministers have reiterated that their policies have been guided by scientific advice, but the process has been shrouded in secrecy and the extent of political influence remains unclear.

In a statement, Mr Ashworth said Mr Cummings was “not a medical or scientific expert” and the government must make clear he can no longer participate or attend, “if the public are to have confidence in the Sage”.

The government’s former chief scientific adviser David King said party political advisers never attended Sage meetings during his tenure from 2000 to 2007 and that it was wrong for them to now do so.

If a political adviser is sitting on Sage “it’s a fair assumption that they are at least in part playing this role, one which it’s simply inappropriate and wrong for them to be playing”, he tweeted.

Prof Stephen Powis, the NHS England medical director, said he was confident that Sage had been a forum for scientific discussion among experts.

“It is then, of course, the role of Sage to advise the government. I have been confident that what happens at Sage is a scientific discussion involving the scientists and the experts who are members of Sage.”

The former head of the civil service, Bob Kerslake, however, said there was a risk “the government is leading the science when it’s supposed to be the other way round”.

In a letter to parliament earlier this month, Sir Patrick Vallance, the UK government’s chief scientific adviser, who chairs Sage, said the “decision not to disclose” membership of the committee was based on advice from the Centre for the Protection of National Infrastructure.

“This contributes towards safeguarding individual members’ personal security and protects them from lobbying and other forms of unwanted influence which may hinder their ability to give impartial advice,” Mr Vallance wrote. “Of course, we do not stop individuals from revealing that they have attended Sage.”

It is understood the chief medical officers and chief scientific advisers from the devolved administrations in Scotland, Wales and Northern Ireland have been allowed to take part in Sage meetings as observers. Unlike Mr Cummings, they were not allowed to ask questions, having instead to submit them in writing in advance.

The editor of the Lancet said Mr Cummings’ attendance of Sage meetings would call into question the independent scientific advice that it is mandated to provide.

“If it is true that Dominic Cummings attended meetings of Sage, then the government led by Boris Johnson has utterly corrupted independent scientific advice,” Richard Horton tweeted. “But I’m afraid to say that the scientists who sit on Sage have allowed themselves to be corrupted”, including the chief scientific officer and chief medical officer. – Guardian