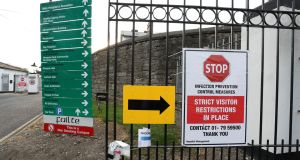 Entrance to St Mary’s Hospital, Phoenix Park where between April 2nd and 17th, 11 residents died, with 10 testing positive for Covid-19 and the 11th person a suspected case. Photograph: Crispin Rodwell

Fifty days after nursing homes closed to visitors – with management acting themselves and not at the State’s direction – health officials are only now getting a handle on the scale of the devastation caused by the coronavirus pandemic among the country’s most vulnerable citizens.

That decision by nursing homes to close their doors to visitors on March 6th was criticised at the time by Dr Tony Holohan, the most senior health official leading the State’s emergency response to the disease that has killed more than 1,000 people, almost half of them nursing home residents.

This week, following the belated decision to mass-test residents and staff, and to examine in detail deaths in nursing homes, a grave picture has begun to emerge of the impact on the sector, just six weeks after Ireland’s first death from Covid-19.

On Friday, new figures showed that almost half – 48.1 per cent – of probable and confirmed Covid-19 deaths in the State, 488 out of a total of 1,014, were nursing home residents.

There were 2,500 confirmed coronavirus cases in the sector, which has 28,000 residents and 30,000 staff. By this week, there were outbreaks of Covid-19 infections in 198 nursing homes, more than one in every three of the 420 private homes and the 120 homes run by the Health Service Executive.

The response of the Government, the HSE and public health officials to the crisis in the sector has been criticised as lacking urgency.

The Health Information and Quality Authority (HIQA), the regulator for the nursing home sector, has been criticised too for, at this stage in the pandemic, asking nursing homes to fill out a 21-page questionnaire on Tuesday to assess preparedness levels. HIQA is also going to be carrying out inspections of nursing homes.

“HIQA talks about preparedness on April 21st? We were surprised that they were issuing documents on preparedness at this stage,” said Tadhg Daly, chief executive of Nursing Homes Ireland (NHI), the group representing owners of private nursing homes.

Dr Jack Lambert, specialist in infectious disease at the Mater hospital, Dublin, said nursing homes could not wait two weeks for HIQA inspections; they urgently needed GPs and nurses to be redeployed from community assessment hubs, most of which, he said, were “superfluous” given how the virus has been suppressed in the community.

“We have to urgently deploy all available staff to the [Covid-19] clusters in the nursing homes. It cannot wait two weeks for HIQA to carry out inspections. That will be a postmortem inspection,” he said.

“If somebody dropped a bomb in Dublin today, would you go out in two weeks and count the dead? You would form a war cabinet and have a response at the end of the day to fight the war.”

The doctor, who has been treating nursing home residents on his wards, said Government and health officials had got the nursing home problem “terribly wrong”. The solution required is not the €72 million promised to the sector by Government, he said, but “boots on the ground” in the form of medical staff and expertise.

“This has not been dealt with the urgency it needs. There are lots of good-meaning people in the Government but they are acting too slow or are too disorganised or they just don’t know what to do. They have lost the plot on what to do with the nursing homes and none of the strategies they come up with to fix the nursing homes are viable options.”

The deepening crisis in nursing homes was overlooked because the focus was on preparing the acute hospital system for an overwhelming surge in cases that has not materialised.

“The nursing homes got hit when our eyes were on the acute-care hospitals,” he said. One midlands nursing home has been waiting 28 days for a test result for a suspected Covid-19 resident. Dr Lambert said agency nurses working in multiple homes contributed to infection rates among residents and staff of different homes.

A NHI survey released on Thursday found that more than 100 nursing homes were missing hundreds of essential nursing and healthcare staff due to Covid-19. Some 96 per cent of nursing homes (227 out of 236 surveyed) said staff had not been available or had been redeployed.

The Department of Health’s National Public Health Emergency Team briefing heard on Friday that 120 staff had been redirected from HSE community teams to work in nursing homes. A HIQA spokesman said staff issues were a matter for the HSE.