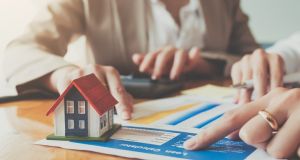 “What they are saying is that they are going to pull back on the amounts they are willing to lend and asking borrowers to come up with more money,” said Karl Deeter of Irish Mortgage Brokers. Photograph: iStock

People who have provisionally reached mortgage deals with banks since the start of the year could see loan offers pulled and agreed exemptions from Central Bank lending rules taken off the table, a leading mortgage broker has warned.

With the property market stalled in recent weeks as a result of the coronavirus crisis and a huge level of uncertainty surrounding the wider economy, banks are looking at ways of cushioning themselves against the economic aftershocks of the pandemic.

“What they are saying is that they are going to pull back on the amounts they are willing to lend and asking borrowers to come up with more money,” said Karl Deeter of Irish Mortgage Brokers.

“One thing banks are factoring in now are price falls and they are pointing out that if prices fall by even 10 per cent in the short term then a first-time borrower who had a loan of 90 per cent with an exemption which allowed them to take out a loan of four or five times their salary would suddenly have a 100 per cent mortgage and affordability might be an issue.”

Some of the leading mortgage lenders in the State have already stopped offering exemptions to would-be borrowers as a result of the Covid-19 crisis.

Among the lenders which are restricting the level of exemptions they are prepared to approve are Permanent TSB, Ulster Bank and KBC.

Mr Deeter said there was no easy answer to the issue and the lenders were expected to be fair to would-be borrowers while also being prudent. “The banks are uncertain but what I would say is likely to happen in the weeks or months ahead is anyone with an exemption who needs to have their loan offer renewed will see the exemption pulled.”

Under the Central Bank mortgage lending rules the maximum a person can can borrow is 3½ times annual income and lenders are permitted to give mortgages of no more than 80 per cent of the value of a property, rising to 90 per cent for first-time buyer.

However, lenders also have the discretion to breach the rules for 20 per cent of its mortgage book, as long as they are comfortable that a would-be borrower has the capacity to repay the loan in the agreed time-frame.

All lenders have their own conditions for the application of exemptions and they change over the course of the year depending on what funding is available and what percentage of their new lending has availed of the exemptions.

The beginning of the year typically sees an uptick in activity as borrowers seek to gain exemptions before they run out but exemptions can and traditionally are applied throughout the year as if an exemption-approved borrower doesn’t draw down their funds within a six-month timeframe, their exemption is given to another applicant.

The deputy governor of the Central Bank has warned banks that will have to act “prudently” and carefully assess what is affordable for people applying for mortgages in the months ahead as the economy reels from the coronavirus shock.

Ed Sibley said there was a huge level of “uncertainty” in the market as a result of the Covid-19 pandemic and he stressed that, as the economic storm clouds continue to gather, lenders will have to “to lend prudently and to look at the affordability of borrowers” before agreeing to offer home loans.

He called on banks to focus on what would-be borrowers could repay and consider the underlying asset value in a market where there was a “high degree of uncertainty”.

Mr Sibley said the country would be “living with Covid-19 for a good deal of time” and said that outside of the short term impacts which have seen people lose their jobs and apply for payment breaks on their mortgages the “longer term implications also need to be considered by having a resilient system, a much more resilient system than it was” at the time of the last economic crash.

Speaking on RTÉ radio on Saturday morning, he stressed that the Central Bank expected lenders to look beyond the immediate, short term implications of the coronavirus crisis and “to act prudently as well as making sure they are protecting their customers and acting in their best interests”.