Labour and Tories clash over claim of Russian ‘interference’ in election 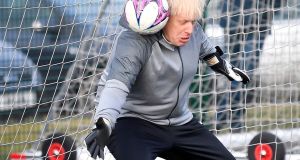 UK prime minister Boris Johnson at a canvassing stop-off at a football ground in Cheadle Hume, Cheshire on Saturday. Later, Mr Johnson was forced to abandon a walkabout in Westhoughton, Lancashire, after dozens of protesters took to the town’s high street. Photograph: Toby Melville/AFP/Getty

The leak of classified UK-US trade documents online, tied to a previous Russian disinformation campaign, has all the hallmarks of an attempt to interfere in Britain’s upcoming election, a British minister said on Saturday.

The opposition Labour Party says the leaked documents show the ruling Conservatives are plotting to offer the state-run National Health Service (NHS) for sale in post-Brexit trade talks with Washington.

The NHS has become a major issue in campaigning for the December 12th election, polls ahead of which show Labour trailing the Conservatives.

On Friday, social media site Reddit said it believed the documents had been leaked by a campaign that originated in Russia, fuelling fears that Moscow was seeking to interfere in Britain’s election.

“I understand from what was being put on that website that those who seem to know about these things say it seems to have all the hallmarks of some form of interference,” culture minister Nicky Morgan told BBC radio.

“If that is the case, that is extremely serious.”

However, Labour leader Jeremy Corbyn has dismissed as “nonsense” the controversy surrounding the source of the leaked documents.

When asked about the claims during a campaign visit to Barry, South Wales, Mr Corbyn told reporters: “This is such an advanced stage of rather belated conspiracy theories by the prime minister.

“When we released the documents, at no stage did the Prime Minister or anybody deny that those documents were real, deny the arguments that we put forward, and if there has been no discussion with the USA about access to our health markets, if all that is wrong, how come after a week they still haven’t said that?

“The issues are that those documents show exactly what the British government was doing in discussions with Donald Trump’s administration in the USA and also why the prime minister has refused to release the report on Russian interference in British politics, which he’s been sitting on for a very long time.”

He accused Mr Johnson of wanting to “hide the issues and the truth” over the future of the NHS in trade deals, adding: “We obtained those documents, we believe those documents to be correct, and nobody until yesterday had denied the correctness of those documents.”

The government has said it is looking into the matter with support from the National Cyber Security Centre, part of the GCHQ signals intelligence agency.

The documents contain 451 pages detailing six meetings between US and British officials to discuss trade and investment since July 2017.

Britain has previously accused Russia of meddling or trying to interfere in western elections, accusations repeatedly denied by Moscow. Officials in Moscow were not immediately available for comment on the latest incident.

The British parliament’s Intelligence and Security Committee (ISC) has carried out an inquiry into allegations of Russian activity aimed at the United Kingdom, including in the 2016 referendum on EU membership, but Mr Johnson declined to publish its report before the election because it needed careful study.

The government says there has been no successful attempt to meddle in British elections but critics have said Mr Johnson sat on the report because it might contain embarrassing revelations about his Conservative Party’s links.

“The prime minister has answers to give which he refuses to do about Russian donations to the Tory Party or the report that he is sitting on about Russian interference in British politics,” Mr Corbyn said.

“Of course there should be no interference in our British political system by [US president] Donald Trump or the Russians.”

Britain’s security agencies have warned that Russia and other countries may try to disrupt next week’s election -- called by Johnson to try to break the Brexit deadlock in parliament -- with cyberattacks or divisive political messages on social media.

Meanwhile, Mr Johnson was forced to abandon a walkabout in Westhoughton, Lancashire, after dozens of protesters took to the town’s high street.

The prime minister had planned to meet voters in the marginal Bolton West constituency, taken by the Tories’ Chris Green in 2015 who held off Labour’s Julie Hilling by just 936 votes in 2017. But after the Tory battle bus arrived amid the presence of protesters a decision was made to abandon the visit.

Around 100 demonstrators, some selling the Socialist Worker newspaper and holding banners saying “No to Racism, No to Boris Johnson”, had lined both sides of the high street where Mr Johnson had planned to go on a walkabout. Instead the Prime Minister travelled back to London by car and his battle bus also headed south ending his whirlwind visit to north west marginal seats on Saturday. - Reuters/PA