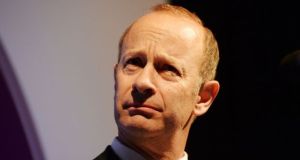 Henry Bolton has lost the leadership of the United Kingdom Independence Party (Ukip) after party members backed a no confidence motion by 867 to 500 at an extraordinary general meeting in Birmingham.

Mr Bolton, who was Ukip’s fourth leader in 18 months, came under pressure to resign after it emerged that his former girlfriend Jo Marney posted racist tweets.

Forced to choose between Ms Marney, a 25-year-old former glamour model, and the party leadership, Mr Bolton announced that he had dumped his girlfriend.

A few days later, however, the couple were spotted together at the National Liberal Club, sparking renewed demands that he should go.

But he refused to step down after the resignation of a number of senior party figures and a unanimous vote of no confidence in him by its National Executive Committee (NEC).

Mr Bolton, a former army officer who became leader last September, said he would stay in his role until party members vote on his future.

Activists gathered in Birmingham today to decide whether to support a no confidence motion in Mr Bolton.

Shortly after 4.30pm it was announced party members at the extraordinary general meeting (EGM) had voted to back a no confidence motion in him.

Earlier, Mr Bolton said he had received a good luck message on his phone from his controversial ex-girlfriend Ms Marney before the EGM. He told reporters: “I had a text message from her wishing me good luck this morning.”

He also said he thought it was going to be very difficult for the party to survive another leadership change.

Outgoing chairman Paul Oakden said: “Henry Bolton has been removed by the democratic decision of the membership”. The NEC will shortly decide on an interim leader and “a leadership election will take place within 90 days”.