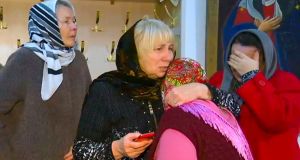 A group of women comfort each other after a memorial service in the Russian Orthodox Church in Kizlyar, Russia on Monday, following Sunday’s gun attack. Photograph: RU-RTR Russian Television via AP

Islamic State has claimed responsibility for a deadly attack in the Russian region of Dagestan on Sunday, when a gunman opened fire on worshippers leaving a Christian Orthodox church.

Five people were killed and five injured in the shooting in Kizlyar, a town sitting on Dagestan’s border with Chechnya in Russia’s troubled North Caucasus.

The gunman, later identified by the Dagestan authorities as Khalil Khalilov a 22-year-old local resident, was shot dead by Russian law enforcers at the scene of the crime.

Islamic State claimed responsibility for the attack at the church in a statement issued by its Amaq news agency late on Sunday. The terror group, also known as Isis, identified the gunman by his nom de guerre Khalil al-Dagestani, and said he was one of the “zealous soldiers of Islam”.

Videos circulating on Russian social media showed a bearded man carrying a hunting rifle approaching the Church of Georgi Pobedonostsa in Kizlyar late on Sunday afternoon as parishioners began leaving a service to celebrate Maslenitsa, a feast that marks the start of the Lenten fast.

Eyewitnesses said that after the first shots rang out parishioners closed the church doors to prevent the gunman from entering the building. There could have been many more casualties, Pavel Kalikin, a priest at the church, told Russian state television. “There were 50 or 60 people inside the church, including children and pregnant women.”

Four women shot by the gunman in the church gardens died instantly. A fifth woman died later on the operating table at a local hospital where she was being treated for gun wounds.

A Russian policeman injured as law enforcers moved to disarm the gunman was also hospitalised.

Predominantly Muslim, Dagestan is one of the poorest and most unstable regions in Russia and has been a fertile recruiting ground for Islamist terrorist groups.

Isis established an affiliate in the region in 2015 and has claimed responsibility for several violent attacks on local law enforcers.

A recent report by the Soufan Group, a US-based security research firm, estimated that 3,417 fighters from Russia had joined the Islamic State’s ranks in Syria and Iraq, with the majority of recruits coming from the North Caucasus.

“It is true that a number of such organisations, including those with connections to international terrorism, are pushing ahead with their destructive activity,” Mr Peskov told Tass on Monday. “As you know our law enforcement agencies have been working vigorously to quash them.”

The Russian Christian Orthodox Church criticised the attack in Kizlyar as a “monstrous crime” that, coming on the eve of the Lenten fast, was a “provocation designed to stoke religious tensions between Orthodox Christians and Muslims” in Dagestan.