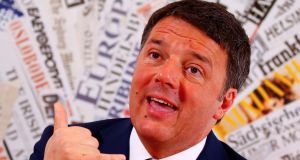 PD party leader Matteo Renzi has tried to make the case that continuity is the best recipe for Italy in matters of security and migration as well as economic policy. Photograph: Tony Gentile/Reuters

The traditional Tuscan ribollita stew was about to be served and the red wine was already on the tables: in front of a cheerful and admiring lunchtime crowd in the Circolo Vie Nuove, a leftwing social club in Florence, Matteo Renzi could savour a desperately needed morale boost.

Grabbing a microphone, the embattled leader of Italy’s centre-left Democratic party spoke nostalgically of his successful run for mayor of the Renaissance city in 2009. “When you supported me here, I understood I could win,” Renzi said.

That victory catapulted Renzi on to Italy’s political stage as a youthful political reformer and led to a three-year stint as prime minister between 2014 and 2016. But with Italy’s general election looming, Renzi has lost his ability to captivate swaths of the Italian electorate outside his Florentine heartland.

He faces a struggle to avoid a second political debacle in the space of 15 months: in 2016 his planned constitutional reform to reduce Italy’s legislative gridlock were resoundingly rejected in a referendum, forcing him to step down as prime minister.

In the election on March 4th, Renzi’s centre-left coalition risks losing to centre-right forces led by Silvio Berlusconi, including far-right Eurosceptics, and to the anti-establishment Five Star Movement. Since leading the PD to victory with 40 per cent in the European elections in 2014, Renzi’s standing has crumbled. Gaining more than 25 per cent of the vote next month would be considered a decent result.

“Many Italians find Renzi unbearable; he is one of the least loved politicians in the country,” says Piero Ignazi, a professor of political science at the University of Bologna. “The praise from the elite has not translated into electoral success.”

All is not lost

Renzi and his allies believe all is not lost. With nearly a third of Italian voters undecided, they pin their hopes on a last-minute drift to the PD as middle-class moderate voters opt for stability and competence over the huge uncertainty of a win for the centre-right or Five Star. They also would like to see Italy’s accelerating recovery – with gross domestic product growth of 1.5 per cent last year – bear political fruit.

“When I spoke to [Barack] Obama the first time [in 2014] he said Italy would end up like Greece. The PD took the country by the hand and pulled it out of the crisis,” Renzi said at an earlier campaign appearance in central Florence.

Last week, Renzi tried to make the case that continuity is the best recipe for Italy in matters of security and migration as well as economic policy, after the alleged murder of a young woman at the hands of Nigerian migrants triggered a violent neo-Nazi reprisal in the city of Macerata, inflaming the campaign.

In Florence Renzi enlisted support from Marco Minniti, the popular interior minister known for clamping down on migrant arrivals across the Mediterranean. “A great party debates, questions itself, and then unites to work with its leader to win the elections,” said Minniti.

Yet Renzi may already be too damaged to score a resounding comeback. He has been heavily criticised for a perceived arrogant and imperious style that alienated the left wing of his party and caused them to break away last year.

Supporters say this is unfair and that Renzi is now more inclusive and less confrontational. “In this last phase he has changed his course and this is positive for him, the party and the country,” says Alberto Bruschini, a retired Tuscan banker, former member of the Italian Communist party and uncle of the PD’s treasurer, who was at the Circolo Vie Nuove.

Critics who believe Renzi will never shed his true colours point to his ruthless selection of the PD’s candidates for office last month, in which he picked his own loyalists at the expense of the internal opposition.

Though Renzi is technically still the PD’s candidate for prime minister, the best he can hope for even if the PD reaches 25 per cent is to see an ally – either Paolo Gentiloni, the premier, or Minniti – picked to lead a grand coalition with Berlusconi after an inconclusive vote.

At a press conference in Rome with foreign journalists, he was asked by a reporter from Tass, the Russian news agency, if he would grant her an interview after his return to Palazzo Chigi, the seat of the Italian government. Renzi’s humorous response belied his self-doubt. “This idea of a return to Palazzo Chigi feels more improbable than an interview with Tass,” he quipped.

Indeed, much debate in Rome surrounds Renzi’s options in the case of defeat: resignation and self-imposed political exile; breaking away and forming a new party aligned with President Emmanuel Macron of France; or trying his luck again.

Outside the Circolo social club Ermellina Morandi (85) says she once backed Renzi but now his bad reputation makes her unsure.

“I watch TV, I pick up newspapers, and people say that he made mistakes on everything. Does that mean we’re all really dumb?” she says.

Renzi’s diehard supporters entertain no such doubts. “I would like to say he’s still the only hope left for Italy,” says Eleonora Pellizzon, a 30-year-old PD volunteer. “If he loses, we will only take steps back.”