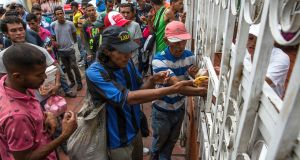 Venezuelans line up in Cúcuta, Colombia, to collect a meal given by a non-profit agency. Photograph: Juan Arredondo/The New York Times

For the past three weeks, Wilya Hernández, her husband and their daughter (2) have been sleeping on the rubbish-strewn streets of Cúcuta, a sprawling and chaotic city on Colombia’s side of the border with Venezuela. Though Antonela, the toddler, often misses meals, Hernández has no desire to return home to Venezuela.

“I need an angel,” Hernández said, holding back tears at 1am on a humid recent night. “We can’t go back, and we can’t stay here.” It is a view shared by thousands of her compatriots who have fled to Cúcuta, where the struggles of adapting to life in a new country can seem more attractive than the hunger and upheaval they endured back home.

Venezuela is steeped in economic and political turmoil. Inflation last year surpassed 2,600 per cent, according to opposition lawmakers, which has exacerbated severe shortages of food and medicine. Venezuela is now governed by a constituent assembly, composed of close allies of President Nicolás Maduro. The opposition-controlled Congress has been sidelined, the highest court is stacked with Maduro loyalists, and the national guard has been ordered to take a hard line on any protests.

Maduro has called for presidential elections to be held in April, though neighbouring countries have urged him not to do so given the number of opposition politicians who have been barred from running or have fled. As authoritarianism continues to tighten its grip on the oil-rich nation, large numbers of its citizens are fleeing, citing the economic crisis and rampant crime as reasons for departure.

In the last six months of 2017, 210,000 Venezuelans came to Colombia, according to officials here, and the numbers are growing in other countries.

In Brazil, the influx has overwhelmed cities and towns in the northern state of Roraima, which borders Venezuela. By the end of last year, an estimated 40,000 Venezuelans had resettled in the state capital, Boa Vista, straining its infrastructure and health system. The rate of crossings has ballooned this year, to several hundred per day, leading Brazil’s military to deploy additional troops to the border.

“The additional armed forces are not being sent to stop Venezuelans from crossing, but to understand who is arriving, and what kind of help each person needs,” Torquato Jardim, the minister of justice and public safety, told reporters last Wednesday.

The military is setting up a field hospital in Roraima to provide basic care to Venezuelans, many of whom have arrived malnourished. But local officials have had tense discussions with their federal counterparts about aid, expressing concern that providing humanitarian assistance could make Roraima even more of a magnet for migrants.

In Colombia, most of those who legally cross the country’s porous border do so on foot at the Simón Bolívar Bridge, just outside Cúcuta, where migration officials say around 30,000 people cross daily. Some buy rice and pasta to take home. Others, with only a suitcase, plan to stay and start anew.

As she waited in line at the border to have her passport stamped, Cailey Domínguez (25) said she was planning to continue on to Peru, where her sister lives. Like many in the line that extended for hundreds of yards around the immigration checkpoint, she said she was hopeful of what lies ahead while heavy-hearted about abandoning her homeland.

“Venezuela had everything,” Domínguez said. “But we have to move on.” Domínguez, from Margarita Island on Venezuela’s northern Caribbean coast, was able to save enough to pay for her passport and bus tickets, though many Venezuelans are not so lucky.

Without passports or the right to work, thousands of Venezuelans in Cúcuta who held down decent jobs back home are now begging for food and change. When work is available, often in construction or reselling contraband sweets at traffic signals, pay is low.

A good day brings in 15,000 Colombian pesos, or about €4.20, which goes to food, water and paying to use bathrooms in cafes. There is seldom anything left over. “I sold my hair to feed my girl,” Hernández said, adding that wigmakers now walk the plazas of Cúcuta where many Venezuelans congregate, wearing signs advertising that they give cash for hair.

The going rate in the border town for women’s hair is 30,000 pesos, or about €8, less than a third of the price in Bogotá, the capital.

Venezuelans in Cúcuta talk of the frosty reception they receive from locals. “We are rats to them,” Daniel Fernández, a 20-year old from Caracas, said at Cúcuta’s bus terminal, where he helps confused Venezuelans organise onward travel in exchange for donations.

Some report that bakery staff in the terminal throw away food at the end of the day, instead of giving it to hungry Venezuelans who sleep on the sidewalk out front.

Freddy Muñoz, a 30-year-old from Maracay, Venezuela, sells canned tuna smuggled over the border on the city’s streets. He, too, has problems with locals. “Drivers don’t break when I cross the road,” Muñoz said, pulling back a dirty sock to reveal his bruised right heel, which was recently scuffed by a passing car. “They say, ‘Go back to your country, Veneco,’” he added, using a commonplace slur thrown at Venezuelans.

Muñoz said he was robbed at knife point one afternoon by two Colombians. “I know by their voices,” he said. “Thankfully, they only took my money and not the tuna.”

Hernández often relies on locals to give food for her toddler, though not everyone is charitable. “Some have given us their hand, but some tell us to go away,” she said. “If I can’t afford to go the bathroom, I’ll go on the street,” Hernández added. “That’s when guys walking by say creepy things.”

The city’s police officers, tasked with dispersing congregations of homeless people from public spaces, said the vast majority of people they have arrested for street crime are Venezuelan. Since January of last year, 1,869 Venezuelan citizens have been arrested for crimes committed in Colombia, according to the country’s attorney general.

Immigration authorities recently raided a public basketball court, sardonically called “Hotel Caracas” by locals, that had become an impromptu shelter for some 900 Venezuelans. About 200 migrants without stamped passports were returned to the border, the government said.

Locals are struggling to handle the influx of foreigners. Miriam Posada, who owns a motorcycle supply shop next to a soup kitchen, remembers when Venezuelans lived comfortably with those from the Colombian side of the border. “We all got on well, we used to have customers come over from there,” Posada said, as a line of homeless Venezuelans began to snake past her storefront. “But now, they are scaring people away. We are making less every month and will have to close down soon if something doesn’t change.”

President Juan Manuel Santos of Colombia, along with the country’s foreign, defence and interior ministers travelled to the border city in early February to meet with local mayors, to discuss ways to tackle what he described as “a growing problem that Colombia has never lived through before”.

Santos announced a number of measures to counter the crisis, including a special task force to keep people off the streets, alongside promises of aid and stricter border controls. A programme granting access to residency for Venezuelans already legally in Colombia was rolled out this month.

But Hernández, her husband and toddler, who did not get passport stamps, now risk deportation under Santos’ new rules. Late one recent night, Hernández laid down on a bench, holding her toddler close, and tried to get some sleep. Her husband had walked a few blocks to an all-night casino to ask for some water. “We want to carry on,” she said. “But we have nothing left.” – New York Times