Charges allege independence leader and others responsible for politically-motivated murders 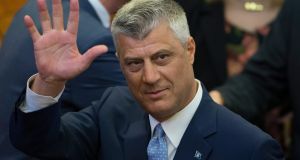 Kosovo’s president Hashim Thaci on the day he was sworn into office in April 2016. Photograph: Valdrin Xhemaj/EPA

The specialist prosecutor’s office in The Hague has charged Kosovo’s president Hashim Thaci with “war crimes, including murder, enforced disappearance of persons, persecution and torture”.

The charges, announced on Wednesday, allege that Mr Thaci, together with former parliamentary speaker Kadri Veseli, and others are “criminally responsible” for the murder of almost 100 ethnic Albanians, Serbs and Roma living in Kosovo. Some of the murders were said to be politically motivated.

The indictment has not yet been confirmed by a judge.

The Hague-based specialist prosecutor was set up in 2015 to investigate allegations raised in a 2011 report by Swiss parliamentarian Dick Marty into alleged organ trafficking, organised crime and political retribution that occurred during and after the 1998-99 Kosovo war.

Wednesday’s charges are the first the body has brought, and will be tried by a Hague-based court under Kosovo law.

During the war, Mr Thaci represented the political wing of the Kosovo Liberation Army, a guerrilla group fighting the Serbian military forces that were part of a Serb nationalist crackdown during the rule of Serbian strongman Slobodan Milosevic.

Mr Veseli was the head of SHIK, Kosovo’s makeshift postwar intelligence agency. Mr Thaci could not be reached for comment on Wednesday. Both men have repeatedly denied wrongdoing.

Kosovo is one of six western Balkans territories that aspire to join the EU, subject to meeting conditions on issues including human rights and legal process. On Wednesday Brussels said it did not comment on specific cases but added that it strongly supported the Kosovo judicial body in The Hague as “an important demonstration of Kosovo’s commitment to the rule of law, which in turn is a core element for Kosovo’s progress on the EU integration path”.

“It is particularly important that the specialist chambers and the specialist prosecutor’s office are able to continue to do their work independently, without any outside interference,” the EU said.

The prosecutor’s office said the indictment had become public because of “repeated efforts” by Mr Thaci and Mr Veseli “to obstruct and undermine” the work of the Kosovo specialist chambers, which will be hearing the cases. The press statement said that both “are believed to have carried out a secret campaign to overturn the law creating the court and otherwise obstruct the work of the court in an attempt to ensure that they do not face justice”.

In December 2017, Mr Veseli’s party attempted to revoke the court’s mandate by a vote in Kosovo’s parliament, but was obstructed by the opposition.

The Hague court is unpopular in Kosovo, which saw 90 per cent of its majority ethnic Albanian population displaced during the war. More than 10,000 people, mostly ethnic Albanians, died. Nato intervened with 11 weeks of bombing to force Milosevic to withdraw the Serbian military.

Serbia still does not recognise the 2008 independence of its former province. Mr Thaci was due to travel to Washington this weekend for a White House meeting with his Serbian counterpart Aleksandar Vucic. Mr Thaci’s office has now cancelled his US trip. US envoy for Kosovo-Serbia negotiations Richard Grenell wrote in a tweet that the talks would go ahead without Mr Thaci, saying Kosovo would be represented by its recently named premier Avdullah Hoti. – Copyright The Financial Times Limited 2020