Julian Assange cannot be extradited from UK to US, judge rules

Extradition request for WikiLeaks founder rejected because of risk of suicide

Julian Assange's partner Stella Morris and his lawyer Jennifer Robinson have called on the US government to drop their case against the Wikileaks founder after a British judge ruled he could not be extradited to the United States to face charges. 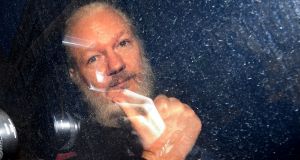 Julian Assange: has been held in high security Belmarsh prison since he was carried out of the Ecuadorian embassy in London. Photograph: Victoria Jones/PA Wire 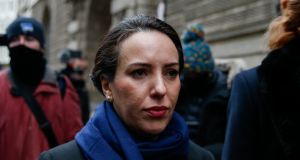 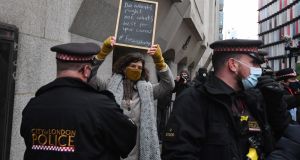 A supporter of Julian Assange outside the Old Bailey. Photograph: Facundo Arrizabalaga

WikiLeaks founder Julian Assange cannot be extradited to the United States to face espionage charges because of the risk of suicide, a British judge has ruled. District judge Vanessa Baraitser rejected Mr Assange’s claim that he was the victim of a political prosecution that endangered press freedom but she accepted medical evidence about his mental health.

“The overall impression is of a depressed and sometimes despairing man fearful for his future,” she said.

The judge said that faced with conditions of near total isolation and without the protective factors that limited his risk at London’s Belmarsh prison, she was satisfied that the procedures described by the US would not prevent Mr Assange from finding a way to take his own life.

“For this reason I have decided extradition would be oppressive by reason of mental harm and I order his discharge,” she said.

The US authorities have 14 days to appeal the decision, during which time Mr Assange will remain in custody unless the judge grants him bail at a hearing on Wednesday.

The US sought his extradition to face charges relating to WikiLeaks’s publication of hundreds of thousands of classified documents leaked by former army intelligence analyst Chelsea Manning. Ms Manning spent seven years in prison for her role in the leaks before Barack Obama commuted her 35-year sentence and she was released in May 2017.

The documents included tens of thousands of pages of military reports that became known as the Afghan War Logs and the Iraq War Logs, as well as more than a quarter of a million US state department cables from American embassies around the world that became known as Cablegate.

Judge Baraitser ruled that Mr Assange’s communications with Ms Manning about how to gain access to secret files “went beyond the mere encouragement of a journalist”. She said his alleged aiding and abetting of hacking and theft and the disclosure of the identities of US informants which put their lives in danger would also be offences in Britain and there was no reason to believe he would not receive a fair trial in the US.

Mr Assange spent seven years in the Ecuadorian embassy in London after Swedish authorities sought to question him in connection with allegations of sexual assault. While he was in the embassy, he fathered two sons with lawyer Stella Moris, who appealed outside the court to Donald Trump to pardon him.

“Mr President, tear down these prison walls,” she said. “Let our little boys have their father. Free Julian, free the press, free us all.”

Michelle Stanistreet, general secretary of the National Union of Journalists (NUJ), welcomed the decision not to extradite Mr Assange but said there was much that was troubling in the judgment.

“The judge rejected the defence case that the charges against Assange related to actions identical to those undertaken daily by most investigative journalists,” she said.

“In doing so, she leaves open the door for a future US administration to confect a similar indictment against a journalist.”