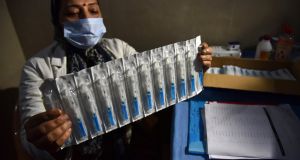 A health worker holds mock Covid-19 vaccine syringes during a dry run of vaccination at a government hospital in Jammu, India, on Saturday. Photograph: Jaipal Singh/EPA

India has granted emergency approval to both the Oxford/AstraZeneca coronavirus vaccine and the domestically developed Covaxin, signalling the start of one of the largest Covid-19 immunisation drives in the world.

At a press conference on Sunday, the drugs controller general of India said the decision to approve both the Oxford vaccine and Covaxin, which is produced by the Indian company Bharat Biotech and was part-funded by the government, had come after “careful examination” of the data.

It makes India the second country to approve emergency use of the Oxford/AstraZeneca vaccine, known as Covishield in India, after the UK gave it the green light on Wednesday.

The approval comes at a crucial time. India, a country of more than 1.3 billion people, has registered more than 10.3 million cases of Covid-19, the second highest in the world, and 149,000 deaths. On Sunday, prime minister Narendra Modi called the approval “a decisive turning point”.

India plans to vaccinate 300 million people in its first stage of vaccinations, with priority given to 30 million frontline healthcare workers, police and members of the armed forces. The vaccine will then be given to those above the age of 50 and people suffering from co-morbidity illnesses. The vaccine will be given free of charge.

However, the approval of Covaxin was met with some concern as the vaccine is still undergoing phase 3 clinical trials and the full results of the vaccine’s efficacy have not been published.

All India Drug Action Network, a public health group, said it was “baffled” by the decision to approve a vaccine still in trials. The government had previously promised that Covaxin, which was produced in conjunction with a government-run body, the Indian Council of Medical Research, would be ready for distribution by August 2020.

The senior opposition leader Shashi Tharoor tweeted his concerns about Covaxin. “The Covaxin has not yet had phase 3 trials. Approval was premature and could be dangerous,” he wrote.

VG Somani, the drugs controller general of India, sought to allay any fears. He said on Sunday: “We’ll never approve anything if there is the slightest of safety concern. The vaccines are 110 per cent safe.”

Significantly, both Covishield and Covaxin will both be produced in India, a country that is already one of the largest pharmaceutical producers in the world and produces about 60 per cent of the world’s vaccines.

The Oxford/AstraZeneca vaccine will be made by the Serum Institute of India, which has already stockpiled 40 million doses before approval. The company has pledged to produce 300 million doses by July, and made repeated assurances that 50 per cent of the vaccines it produces will be reserved for India.

Adar Poonawalla, the CEO of the Serum Institute, on Sunday said it will not allow the export of the vaccine for several months, meaning poorer countries may have to wait before beginning their vaccination programmes. With rich nations reserving most of the vaccines that will be made this year, Serum Institute – the world’s largest vaccine manufacturer – is likely to make most of the inoculations for developing countries.

However, India faces huge challenges in distributing the vaccine across the vast country. Healthcare is uneven, lacking resources and power, and access is often difficult in rural areas. The government has begun training about 20,000 health workers to administer the vaccine and last week conducted trial runs in four states, using placebo vaccines administered by trained professionals.

Covishield and Covaxin only need to be stored at temperatures of 2-8C, far more manageable than the Pfizer and Moderna vaccines that have been rolled out in Europe and the United States.

However, there are concerns that India’s cold chain – the refrigerated resources that enable the vaccine to be safely transported and stored – is not yet up to capacity to cope with vaccines for 1.3 billion people. The government has brought in the aviation and transport ministries to draw up plans for how the vaccine can be delivered across the country.

The government said it intended to draw on its highly successful polio eradication programme and infant immunisation programme, which inoculates about 27 million children annually. – Guardian