The United Kingdom has started the rollout of the Oxford University/AstraZeneca Covid-19 vaccine, with 82-year-old dialysis patient Brian Pinker the first in the world to receive the shot. Video: Reuters 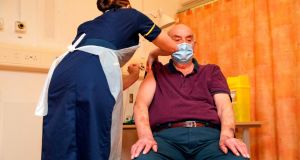 The UK has become the first country to administer the Oxford/AstraZeneca coronavirus vaccine to its population amid rapidly rising case numbers and growing pressure on the NHS.

In a statement on Monday, the NHS said that Brian Pinker, an 82-year-old kidney dialysis patient, received the jab at Oxford University Hospital. The vaccine was approved for emergency use by the UK regulator last week.

The vaccine will be delivered at a small number of hospitals in the first few days for surveillance reasons, before being rolled out to GP-led services later in the week.

Earlier on Monday, health secretary Matt Hancock said that the UK would have more than 1,000 vaccination sites operating by the end of the week.

Pascal Soriot, AstraZeneca chief executive, has said that his company could supply 2m doses of the vaccine each week.

Asked how soon vaccinations could take place at that rate, Stephen Powis, national medical director of NHS England, told BBC Breakfast on Monday: “Certainly this month we’ll be able to get up to that sort of number but that would depend on supplies. We’ll be delivering it as soon as we get it.”

The UK is betting on a pragmatic approach to immunisations by lengthening the period between vaccine doses in a bid to deploy wider immunity amid a rapidly resurging outbreak. Some hospitals are under severe strain.

The approach is not without controversy: Pfizer, which makes one of the two vaccines approved in the UK, has hit out at the decision, while doctors have criticised pushing back second immunisations for patients who had already received their first jab.

The UK has also drawn up emergency provisions to mix vaccine doses under very limited circumstances, which some scientists warned was unusual and not supported by evidence. Health officials insist it would be an emergency measure to be used in extreme cases.

Meanwhile, drugmakers are racing to secure their supply chains as officials warn that vaccination targets have not yet been met. The EU, UK and US have all fallen short of their immunisation targets for 2020.

European regulators have said they do not expect to approve the Oxford/AstraZeneca vaccine before next month, while US approval is not expected until April. Indian authorities gave the jab an emergency green light, similar to what the UK has done, over the weekend.

The vaccine’s portability and cost make it a much more practical solution for countries that do not have access to ultra-cold supply chains, on which the Moderna and BioNTech/Pfizer vaccines rely. – Copyright The Financial Times Limited 2021