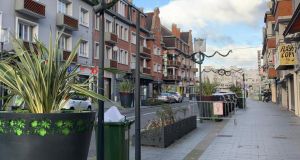 Truck drivers appear to be steering clear of Calais, at least for now. Photograph: Sharon Gaffney

Mariah Carey hits blast out from a speaker beside a shuttered restaurant in central Calais, but all the locals seem to want for Christmas is a break from Brexit. For many, fatigue with the process set in several years ago. That weariness has since been exacerbated by the ongoing health crisis. Business owners here say their primary concern is overwhelmingly Covid-19.

While French lockdown restrictions have been eased, restaurants, bars and cultural venues remain closed. The holiday period is traditionally quiet in Calais but with only essential retailers now open, the streets of the port city are mostly empty.

There were fears that Calais would now be facing into a rerun of the traffic chaos endured by truck drivers here and in the UK in the run-up to Christmas. French customs officials say there’s unlikely to be a repeat of that disruption after the Brexit transition period officially ends at midnight (French time).

'I’m hoping to see English tourist numbers pick up from the New Year. They’ll come to buy cheap alcohol and cigarettes, even if they have to fill in forms'

Thibaut Rougelot, head of regional communications with the French customs service, says the new infrastructure installed at the Calais terminal ferry, at a cost of €13 million, should help to ensure a smooth transit for inward and outward-bound traffic. But he concedes that there may be some teething problems as drivers get used to the post-Brexit trade rules.

“If they are delayed here at Calais because they don’t have their online customs declarations filled in correctly, they will know what to do the next time they travel through the port. There may well be some difficulties initially.”

He says that many companies began stockpiling goods at depots in the UK and in Europe earlier this month to avoid being caught up in potential delays at Dover or Calais.

While the first direct ferry sailings from Ireland to Cherbourg and Dunkirk are expected to be full from this weekend, truck drivers appear to be steering clear of Calais, at least for now.

Philippe Galloux is originally from Paris but has been working as a taxi driver in northern France for the past three years. He says there were thousands of vehicles stuck in tailbacks stretching 50km towards the Belgian border over several days last week. “It was a disaster,” he says.

“Thankfully things are much better now, but Brexit is such a shame. It complicates everything. The British are free to make their own decisions and to do as they please, of course, but I think that the next UK government will reverse this shambles. They will want Britain to rejoin the EU. I think that no matter what happens with Brexit, British tourists will still want to come here to Calais.”

There’s widespread optimism that those tourist numbers will increase thanks to the return of duty-free trade between France and the UK. Christophe Auchede, owner of the L’Atelier du Chocolat boutique on Rue Royale, Calais’ main thoroughfare, says that twenty years ago the city was a thriving tourist hot-spot.

“So many people used to come here from England”, he says. “The restaurants, the bars, the wine shops did a roaring trade. Brexit won’t really change anything for my business but I’m hoping to see English tourist numbers pick up from the New Year. They’ll come to buy cheap alcohol and cigarettes, even if they have to fill in forms.”

But others, such as 52-year-old Calais native, Claude Fernandez, say they will no longer be making regular trips across the English Channel.

“It’s going to be too complicated now. I used to love going over to Dover for the day with my children, but now there will be declarations to complete. On top of that, we’ll have to do a Covid test to get back into France. It’s a double constraint.”

For now, he’s happy to come to the harbour every day to fish and to watch the ferries sail in through the port.

Calais is also seen as a gateway to Britain for the thousands of migrants who make the often perilous trip to Dover each year. Security has been reinforced in and around the city ahead of January 1st, amid concerns that there may be an increase in the number of people attempting to cross the Channel. An additional four hundred gendarmes (police officers) and members of the security forces have been deployed to the area, and police vans can be seen making regular patrols around the city.

Instead of stowing away on trucks, many migrants now risk their lives by boarding small boats or rafts for the Channel crossing. An estimated eight thousand people reached Britain by this method this year, while French authorities intercepted another five thousand people attempting to make the journey.

Even for migrants, this New Year’s Eve feels like the calm before the Brexit storm. Of the dozens who gathered to receive bread rolls and tea from a charity at an industrial park on the outskirts of the city this morning, most were open about their desire to reach the UK.

“But we can’t today because there are no trucks.”