US president Donald Trump pressured Georgia's top election official to "find" enough votes to overturn his election defeat in the state, according to a recording of the hour-long call published by US media. Video: Reuters 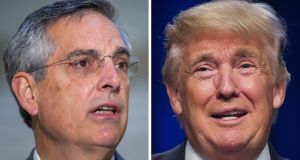 Donald Trump has been recorded pressuring Georgia’s secretary of state to overturn US president-elect Joe Biden’s victory in the state, in a tape obtained by the Washington Post.

The conversation is mainly between Trump and Brad Raffensperger, Georgia’s Republican secretary of state, but Trump allies including Mark Meadows, the White House chief of staff, and attorney Cleta Mitchell were also present, as was Ryan Germany, Raffensperger’s general counsel. Here are the main points:

On the call Trump pressed Raffensperger to “find 11,780 votes”.

“The people of Georgia are angry, the people in the country are angry,” Trump said. “And there’s nothing wrong with saying, you know, um, that you’ve recalculated.” He later pleaded: “So what are we going to do here folks? I only need 11,000 votes. Fellas, I need 11,000 votes. Give me a break.”

Joe Biden won Georgia. The result has been certified and Biden’s electoral college victory will be ratified by Congress on Wednesday.

Trump insisted: “There’s no way I lost Georgia. There’s no way. We won by hundreds of thousands of votes.” He went on to suggest that Raffensperger could face a criminal investigation. “You know what they did and you’re not reporting it,” Trump said. “You know, that’s a criminal offence. And you know, you can’t let that happen. That’s a big risk to you and to Ryan [Germany] , your lawyer. That’s a big risk.”

Trump told Raffensperger that if he did not act by Tuesday he would be harming the chances of Georgia Republicans David Perdue and Kelly Loeffler in this week’s run-off elections, which will determine whether the Democrats or the Republicans control the Senate. Referring to the run-offs in the call, Trump said, “You would be respected, really respected, if this can be straightened out before the election.”

Raffensperger continued to stand up to Trump

Raffensperger is a Republican who has pushed back against Trump and insisted Biden’s win in Georgia was fair. Responding to Trump, he said: “Well, Mr President, the challenge that you have is, the data you have is wrong.”

When Trump claimed that over 5,000 ballots were cast in the state by dead people, Raffensperger responded: “The actual number was two. Two. Two people that were dead that voted.”

Trump may have committed a crime

The University of Richmond law professor Carl Tobias said Trump might be “in legal jeopardy after Biden is inaugurated”. In an email to the Guardian, he wrote: “For example, if the justice department or US attorneys believe that Trump violated federal law, or if local prosecutors in states such as Arizona, Georgia, Michigan and Wisconsin, where Trump may have engaged in similar behaviour with state or local election officials, believe that Trump violated state election laws, the federal or state prosecutors could file suit against Trump.”

Richard H Pildes, a constitutional law professor at New York University, told the Washington Post: “The president is either knowingly attempting to coerce state officials into corrupting the integrity of the election or is so deluded that he believes what he’s saying.” Trump’s actions may have violated federal statutes, he said.

Michael R Bromwich, a former federal prosecutor in the US attorney’s office for the Southern District of New York, wrote: “Unless there are portions of the tape that somehow negate criminal intent, ‘I just want to find 11,780 votes’ and his threats against Raffensperger and his counsel violate 52 U.S. Code 20511.”

Trump refused to back down

On Sunday Trump tweeted: “I spoke to Secretary of State Brad Raffensperger yesterday about Fulton county and voter fraud in Georgia. He was unwilling, or unable, to answer questions such as the ‘ballots under table’ scam, ballot destruction, out of state ‘voters’, dead voters, and more. He has no clue!”

Twitter labelled the tweet with the disclaimer: “This claim about election fraud is disputed” and Raffensperger responded to Trump’s claims with a tweet saying: “Respectfully, President Trump: What you’re saying is not true.” – Guardian