Armenian-Azeri clashes continue as EU, Russia and US step up peace efforts 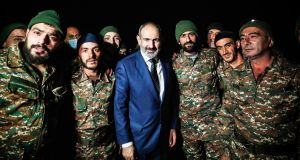 Armenia has played down the possibility of a swift negotiated end to its conflict with Azerbaijan over Nagorno-Karabakh, even as world powers intensify diplomatic efforts to halt clashes in and around the disputed region in the south Caucasus.

Hundreds of soldiers and scores of civilians have been killed in three weeks of fighting over the mountainous breakaway area of Azerbaijan, which has been run by its ethnic Armenian majority since a war in the 1990s that claimed 30,000 lives.

“There is no diplomatic answer to the Karabakh question, and from now on there will not be one for a long time,” Armenian prime minister Nikol Pashinyan said on Wednesday.

“Practice has shown that what is acceptable for Armenia is unacceptable for Azerbaijan. It shows that it’s pointless to talk about some diplomatic solution, at least at this stage.”

A day earlier, Azeri president Ilham Aliyev reiterated that three decades of negotiations, chaired by Russia, the US and France, had failed to resolve the dispute.

“We changed the status quo by showing strength on the battlefield,” he said in an address to his nation, as he announced that Azeri forces had re-taken control of more towns and villages in Nagorno-Karabakh and adjoining areas.

“Ours is the cause of justice. We are fighting on our own land, giving martyrs and restoring our territorial integrity ... Armenia must declare before it is too late that it is withdrawing from the occupied territories. After that the fighting may stop.”

Moscow has led efforts to negotiate a ceasefire, but two attempts to implement a truce agreement brokered by Russia have failed to halt the fighting.

Russian foreign minister Sergei Lavrov held separate talks in Moscow on Wednesday with his counterparts from Azerbaijan and Armenia, who are both scheduled to meet US secretary of state Mike Pompeo in Washington on Friday.

The foreign ministry in Moscow said the diplomats discussed “urgent issues related to implementing previously reached agreements on a ceasefire ... and creating conditions for a sustainable settlement” to the conflict.

In Brussels, meanwhile, Armenian president Armen Sarkissian met EU and Nato leaders to discuss fighting that has focused attention on a region bordered by Russia, Turkey and Iran that serves as an important transit route for oil and gas.

Turkey has given full backing to its ally Azerbaijan and its demand for a full Armenian withdrawal from the contested region, while also accusing Russia, the US and France of siding with Yerevan in the dispute.

Ankara has also rejected allegations from Yerevan, Paris and Moscow that it has sent pro-Turkish fighters from Syria to bolster the ranks of Azeri soldiers.