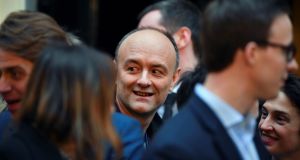 The UK’s top civil servant is set to stay in Downing Street and oversee a far-reaching shake-up of the government machine planned by British prime minister Boris Johnson rather than move to the vacant ambassadorial job in Washington.

Cabinet secretary Mark Sedwill had been tipped to move to the US, but friends said he was relishing the prospect of overhauling the Whitehall bureaucracy to help develop a post-Brexit economy – focused on boosting northern England – and to update UK foreign policy based on the concept of “global Britain”.

Dominic Cummings, the prime minister’s chief adviser and a fierce critic of Whitehall, is driving the planned changes to the government machine, which will take place after Britain leaves the EU on the scheduled date of January 31st.

Mr Cummings is credited with devising the Conservatives’ “red wall” general election strategy that saw the party seize seats long held by Labour in northern England, the midlands and Wales by using Brexit and pledges to improve public services to woo voters.

Mr Johnson now wants to create a powerful new business department – absorbing the international trade department – to secure inward investment for the UK’s poorer regions and strike trade deals across the world, according to officials briefed on his proposals.

Rishi Sunak, treasury chief secretary, is seen in Whitehall as a potential head of the new economic superministry, which might also take responsibility for broadband and artificial intelligence from the department for digital, culture, media and sport.

Officials confirmed that Mr Johnson was looking to recreate an energy and climate change department – as first reported in the Sunday Times – because of the political imperative of tackling global warming.

The department for exiting the EU is due to be wound up. Negotiations on a future UK-EU relationship are expected to be co-ordinated from the cabinet office, with Michael Gove, chancellor of the Duchy of Lancaster, expected to take charge.

Given the scale of the Whitehall upheaval, Sir Mark is set to stay as cabinet secretary, rather than fill the Washington vacancy caused by the resignation last year of Kim Darroch, the ambassador who incurred the wrath of US president Donald Trump.

“He looks full of energy and is relishing the very big job ahead,” said one senior government figure.

A friend of Sir Mark, who took on his current role in October 2018, said: “He’s enjoying the job. Washington is always something he could do later.”

Mr Cummings’ interest in overhauling the Whitehall machine – set out in a lacerating speech and blog in 2014 – could now be given full rein, given Mr Johnson’s big House of Commons majority.

The mastermind of the Vote Leave campaign in the 2016 Brexit referendum outlined five years ago what he would do “if I ever get control of Number 10” – a scenario that seemed unlikely at the time.

Mr Cummings complained that senior officials often took Fridays off and that a safety-first culture was more prevalent than a culture of original long-term thinking.

“Almost no one is ever fired,” he said. “Failure is normal, it is not something to be avoided.”

Mr Cummings also presaged the amalgamation of Whitehall departments in 2014 when he said: “The idea of a cabinet of over 30 people is a complete farce. It should be a maximum of probably six or seven people.”

The prime minister’s chief adviser believes the whole British establishment needs reforming. “The system is stuck in a vicious circle,” he wrote in his blog, The Hollow Men, in 2014. “It is held in place by feedback loops between people, ideas and institutions.”

He added: “No 10 will continue to hurtle from crisis to crisis with no priorities and no understanding of how to get things done, the civil service will fail repeatedly and waste billions, the media will continue obsessing about the new rather than the important, and the public will continue to fume with rage.”

Mr Cummings is seen in Whitehall as a revolutionary who wants to upend the established order. “Some are worried, but others in the civil service see this as an opportunity,” said one official.

Although Whitehall reform features high on the agenda of Mr Johnson’s government, it also has other institutions in its sights.

The Tory election manifesto suggested the prime minister might try to clip the wings of the supreme court after it ruled against his suspension of parliament in September.

“After Brexit we also need to look at the broader aspects of our constitution: the relationship between the government, parliament and the courts,” said the document.

Mr Sunak told the BBC on Sunday: “We believe fully in the independence of the courts but of course we should look at all our institutions on a regular basis to make sure they’re functioning effectively.”

He also confirmed the government could decriminalise the non-payment of the television licence fee, which funds the BBC.

Tensions between Mr Johnson’s team and the BBC – notably over his refusal to agree to an interview with Andrew Neil, the broadcaster’s most feared inquisitor – flared during the election. – Copyright The Financial Times Limited 2019