India: More than 100 protesters injured in clashes over citizenship law 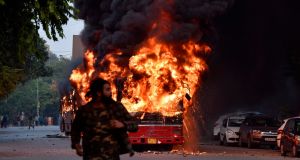 A bus is on fire following demonstration against the Indian government’s Citizenship Amendment Bill in New Delhi. Photograph: STR/AFP via Getty Images

More than 100 activists protesting against a new Indian citizenship law were injured in New Delhi on Sunday as they clashed with police who used tear gas and baton charges to disperse demonstrators at a major university.

Prime minister Narendra Modi’s government says the new law will save religious minorities such as Hindus and Christians from persecution in neighbouring Bangladesh, Pakistan and Afghanistan by offering them a path to Indian citizenship. But critics say the law, which does not make the same provision for Muslims, weakens India’s secular foundations.

Sunday was the fifth day of protests in a row across the country against the law enacted earlier this month, and the third day running in the capital.

Police tried to contain thousands of protesters, including locals and students, who had gathered near the Jamia Millia Islamia University in southeast Delhi. Clashes erupted and authorities said protesters torched buses, cars and motorbikes.

Officials at two local hospitals said more than 100 people with injuries had been brought in following the clashes.

“Many of them have fracture injuries. We are running out of plaster of paris for casts,” said Inamul Hassan, an official at the Alshifa Hospital located near the university, adding more than 80 people with injuries had been brought to the hospital.

A spokesman for Holy Family Hospital told news agency ANI that it had treated 26 students suffering from minor injuries.

Police resorted to baton charges and firing tear gas on the protesters to disperse them, according to a Reuters witness. Officers stormed the campus grounds to confront protesters they said fled into the university and threw stones at police.

“About 4,000 people were protesting and police did what they did to disperse them when the crowd burnt buses,” said Chinmoy Biswal, a senior police officer in the area. “If it had been a peaceful mob it would have been dispersed peacefully.”

He added that police entered the campus to maintain order and that six officers had been wounded in the clashes.

However some students and officials at Jamia Millia, a storied institution almost 100 years old, decried the police action.

“Police have entered the campus by force, no permission was given. Our staff and students are being beaten up and forced to leave the campus,” Waseem Ahmed Khan, a senior faculty member of the university, told ANI.

The protests have raged particularly in some eastern states such as Assam, Tripura and West Bengal, where resentment towards Bangladeshi immigrants has persisted for decades.

Authorities have shut down internet access in several parts of the affected states in an attempt to maintain law and order.

Modi, speaking at a rally in the eastern state of Jharkhand on Sunday, blamed the opposition Congress party and its allies for inciting violence against the citizenship law.

The Congress party in turn slammed Modi’s Bharatiya Janata Party on Twitter saying the government “has failed at its duty to maintain peace in the nation”.

Local authorities ordered all schools in southeast Delhi to remain closed on Monday. Jamia Millia university had already said, on Saturday, that it was closing early for the winter break. The Aligarh Muslim University in the northern state of Uttar Pradesh also announced that it was shutting early for the break after student protesters clashed with police on Sunday.

Hundreds of activists gathered outside the New Delhi police headquarters on Sunday night to protest against alleged police brutality and the detention of students.

A lawyer, who is trying to negotiate the release of detained students, said at least 28 were being held at one police station in South Delhi. A police spokesman did not respond to a call, or message asking about the number of people detained.

Meanwhile, protests against the law continued in parts of eastern India. A highway connecting West Bengal and Assam was blocked in several places on Sunday when protesters burnt tyres, demanding the law be scrapped. Violence was also reported in Patna, the capital of the eastern state of Bihar. – Reuters