Boris Johnson and Jeremy Corbyn clash on Brexit, public services and trust in politics during their final debate of the general election campaign. Video: BBC 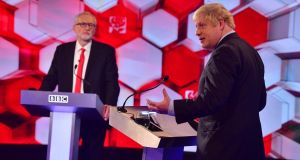 A snap poll from YouGov found the public almost evenly divided over who won the debate, with 48 per cent saying Jeremy Corbyn came out on top and 52 per cent choosing Boris Johnson. Photograph: Jeff Overs/EPA/BBC

Boris Johnson and Jeremy Corbyn have clashed on Brexit, public services and trust in politics during their final debate of the general election campaign. The prime minister said the choice next Thursday was between a Conservative majority that would deliver Brexit and a hung parliament that would see Mr Corbyn depending on the Scottish National Party (SNP) to govern.

Mr Corbyn accused Mr Johnson of deceiving the public over his Brexit deal, pointing to leaked documents from the Treasury about its impact on trade between Northern Ireland and the rest of the United Kingdom. The documents, which Labour published on Friday morning, say that customs checks and paperwork would add costs to businesses and consumers in the North.

Mr Johnson asserted that his Brexit deal would create no new barriers in the Irish Sea and questioned Mr Corbyn’s credentials on Northern Ireland.

“I find it slightly curious to be lectured about the union between Great Britain and Northern Ireland . . . when he actually supported for four decades the campaign by the IRA to destroy it,” he said.

Mr Corbyn defended his party’s economic policies, which he said were fully costed and would mean that only the top 5 per cent of earners would pay more tax.

“My kind of socialism is one where you don’t leave people behind,” he said.

“We have gone too far down the road with free-market economics and created too much inequality.

A snap poll from YouGov found the public almost evenly divided over who won the debate, with 52 per cent choosing Mr Johnson and 48 per cent saying Mr Corbyn came out on top.

Earlier, former Conservative prime minister John Major endorsed Dominic Grieve, David Gauke and Anne Milton, who were expelled from the party over Brexit and are standing as Independents. In a video message to an anti-Brexit rally in London, Sir John described the three former ministers as principled, decent human beings.

Tony Blair, who succeeded Sir John as prime minister, said he would vote Labour but urged others to vote tactically to ensure that Mr Johnson would not return with a majority.

Mr Blair said that Britain’s place in Europe should be determined by a second referendum rather than a general election and he mocked the claims of Brexiteers that leaving the European Union would be easy.

“Brexit is not a mistake, I wish it were, it is a disaster, a disaster our country cannot afford. And I say to those of my generation who voted for it, with age can come the wisdom of lived experience. But it is youth that has its finger on the beating pulse of the future and we have no right to steal that future from them,” he said.