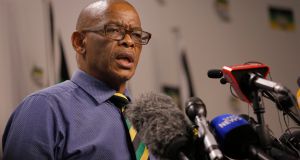 Ace Magashule, one of the most senior politicians in South Africa’s ruling party, is scheduled to appear in court on Friday on corruption charges linked to an asbestos contract awarded in a province when he was its premier.

Magashule (61), the African National Congress (ANC) party’s secretary general, was issued with a warrant of arrest earlier this week for his alleged role in relation to a €14 million contract to find and remove asbestos from homes in disadvantaged neighbourhoods in the Free State province.

Mr Magashule, whose position in the ANC sees him run the governing party’s day-to-day operations, responded to the arrest warrant by saying he was “ready for anything”.

“I have not done anything wrong . . . I am a law-abiding citizen,” he told journalists on Tuesday after his arrest warrant and forthcoming appearance at Bloemfontein magistrate court were made public.

Allegations of corruption have dogged Mr Magashule, a longstanding ally of South Africa’s former president Jacob Zuma, since he rose to prominence in 2017 by winning one of the ANC’s top six positions at its elective conference.

Prior to this elevation Mr Magashule was the movement’s premier for the Free State between 2009 and 2017. The asbestos contract under scrutiny was awarded in 2014.

In the last 18 months alone Mr Magashule has been implicated in a range of corrupt activities at an ongoing commission of inquiry into public sector corruption. He has denied wrongdoing in relation to these accusations.

According to the online Daily Maverick newspaper, some of the charges Mr Magashule faces relate to payments made to third parties with the proceeds of the asbestos contract, allegedly on the ANC secretary general’s instruction.

It is alleged the companies that were awarded the asbestos contract outsourced the removal work to other businesses at a fraction of the cost of its price. Seven businesspeople and provincial officials linked to the alleged scam have already been arrested and charged with corruption.

The issuance of a warrant of arrest for Mr Magashule has caused serious tensions in the upper echelons of the ANC, which appears to have backtracked on a recent promise to act against party officials accused of corruption.

Only last August the ANC executive decided that leaders in the party who are charged with corruption must stand aside from their duties until legal proceedings against them have been finalised, or be suspended.

But after a meeting of the ANC’s leadership on Tuesday, the party’s treasurer general Paul Mashatile confirmed that Mr Magashule had not been forced to withdraw from his role despite the seriousness of the charges.

Mr Mashatile said the ANC’s top decision-making body, the national executive committee, had yet to finalise its framework to deal with corruption-accused officials.

However, the National Prosecuting Authority’s decision to charge Mr Magashule is likely to reflect well on South Africa’s leader, Cyril Ramaphosa, who made tackling public sector corruption one of the pillars of his 2018 presidential election campaign.