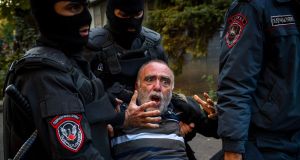 Armenian police officers detain a protester during a rally in Yerevan against the agreement to end fighting with Azerbaijan over the disputed Nagorno-Karabakh region. Photograph: Karen Minasyan/AFP via Getty

Armenian prime minister Nikol Pashinyan has rejected calls to resign over a deal that gives Azerbaijan control over swathes of Nagorno-Karabakh, as Russian peacekeepers were deployed to the disputed region after six weeks of fighting.

Thousands of angry Armenians rallied in their capital, Yerevan, on Thursday, despite the arrest of dozens of protesters and at least 10 opposition leaders during an earlier march at which they denounced the deal as “treachery” and “surrender”.

The Moscow-brokered accord came into force on Tuesday, ending clashes that killed well over 1,000 people in and around Nagorno-Karabakh, a breakaway region of Azerbaijan run by its ethnic Armenian majority since a war in the early 1990s.

The agreement locks in major battlefield gains made by Azeri forces since they began an offensive in late September, and leaves the province’s separatist Armenian administration in charge of significantly reduced territory that will soon be patrolled by Russian peacekeepers. Critics of the pact stormed parliament in Yerevan when it was announced.

Mr Pashinyan said on Thursday that he signed the deal when it became clear that several key towns, including the regional capital Stepanakert, would soon fall and “20,000 Armenian troops and officers could find themselves surrounded by enemy troops, facing the prospect of being killed or captured”.

“Our priority now is to restore the atmosphere of stability and security in the country ... The government will not give in to provocations from rebel groups sponsored by the former authorities,” he added.

“The organisers of the riots and many of the active participants have been arrested, many are in hiding, but they will definitely be found and brought to justice. I call on all our compatriots not to give in to provocations but to unite around a government that is determined ... to get the country out of this situation.”

Mr Pashinyan lambasted the political elites that he challenged when taking power in a peaceful 2018 revolution, blaming their rampant corruption for weakening the nation’s military. He also reassured ethnic Armenian residents of Nagorno-Karabakh that Russian peacekeepers would protect them.

Moscow has started deploying 1,960 troops to the region, with armoured vehicles and helicopters, under an initial five-year mandate that includes responsibility for guarding the main road between Stepanakert and Armenia.

Russia has rejected claims from Turkey that its peacekeepers will also patrol the province, as Ankara looks to convert its strong support for Azerbaijan’s military offensive into greater influence in the strategic south Caucasus.

Russian foreign minister Sergei Lavrov said Turkish and Russian officers would work together at a centre for monitoring implementation of the peace deal, which would be located on Azeri territory some distance from Nagorno-Karabakh.

His Turkish counterpart, Mevlut Cavusoglu, said Armenia must now “hand over all occupied lands . . . Azerbaijan is in favour of a peaceful solution but if Armenia insists on violating the agreement, then it will have to bear the consequences.”

In Yerevan, Mr Pashinyan insisted the long-running dispute was far from over.

This week’s deal “only implies cessation of hostilities”, he said. “The Nagorno-Karabakh issue was not resolved before the signing of the [agreement], nor has it been settled after it. There is still much to be done in this respect.”