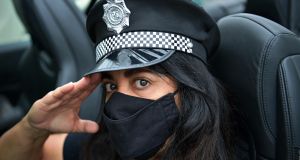 Regina Bento Sequeira, a 59-year-old lawyer and candidate for the municipal elections in Brazil, poses for a picture in Rio de Janeiro. Photograph: Carl de Souza/AFP via Getty Images

Brazil will provide an early test of the enduring appeal of right-wing populism following the defeat of US president Donald Trump when it holds local elections on Sunday.

Though president Jair Bolsonaro, a fervent Trump acolyte, is not on the ballot he is supporting a number of high-profile candidates in key cities, making these municipal races a gauge of the far-right leader’s appeal two years into his term.

Mr Bolsonaro had said he would stay out of the election after his attempt to found a new political party in time to contest it ended in failure. But buoyed by a spike in popularity, partly due to generous emergency social welfare payments during the Covid-19 pandemic, he reversed course and has endorsed a growing number of candidates from other parties in races across the country.

Two years ago his anti-establishment appeal helped dozens of fringe right-wing figures unexpectedly ride his electoral coattails into congress and governorships. But this year candidates who have won his endorsement are struggling in the polls.

In Brazil’s biggest city, São Paulo, perennial aspirant for mayor Celso Russomanno had to drop any mention of the president’s backing from his campaign jingle after he started to slide precipitously in the polls, having started the mayoral campaign as the frontrunner.

In contrast, Rio de Janeiro’s incumbent mayor Marcelo Crivella, a bishop in a neo-Pentecostal church that is a core element of the president’s hard-right coalition, has not shied away from showcasing his close relationship with Mr Bolsonaro.

But it has done little for his re-election effort, which is in trouble.

He suffers from a rejection rate of 62 per cent and his poll numbers are mired in the mid-teens after a chaotic four years in office that has been marked by corruption and a catastrophic response to the coronavirus emergency.

“These candidates endorsed by Bolsonaro were already weak candidates, but his support for them appears to be the kiss of death,” says David Fleischer, professor of politics at the University of Brasília.

The favourites to do well at the expense of those backed by the president are from more traditional right and centre-right parties which were marginalised by the sudden emergence with Bolsonaro of the hard right as a major political force in Brazilian elections. The leaders of the former group are already jockeying to emerge as the standard-bearer against him in the presidential election in 2022.

Meanwhile Brazil’s left-wing parties are struggling to improve on their disastrous showing four years ago. The São Paulo mayoral candidate of the Workers’ Party of former presidents Lula and Dilma Rousseff, Jilmar Tatto, has come under pressure to abandon the race and back Guilherme Boulos, his rival from the smaller Socialism and Liberty Party who is better placed in the polls.

The Workers’ Party, which dominated Brazilian politics for more than a decade before its removal from power in 2016 amidst a massive corruption scandal during a deep recession, currently does not run a single one of Brazil’s 100 largest cities. This year it is looking to rebuild its local base by targeting mid-sized cities, with polls showing it only has an outside chance of winning more than one of the country’s 26 state capitals.

That did not stop Mr Bolsonaro from warning that the left could return to power in Brazil by means of fraud, throwing doubt on his own country’s highly regarded electronic voting system at an event this week.

The Brazilian president’s unfounded claim comes as his army of supporters on Facebook and Twitter spent the week echoing the unsubstantiated allegations of Mr Trump that he was denied re-election as US president because of fraud.

Mr Bolsonaro also did not congratulate US president-elect Joe Biden on his victory, instead threatening Mr Biden over his pledge during the US presidential election campaign to impose sanctions on Brazil if its government did not take action to curb deforestation in the Amazon.

“Diplomacy alone is not enough. When saliva runs out you have to have gunpowder, otherwise it doesn’t work,” the former army captain said in a warning that immediately attracted national ridicule. The US defence budget is 24 times bigger than that of Brazil.